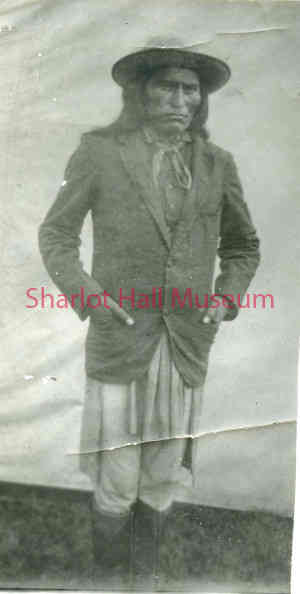 Chiricahua Apache Chief Naiche, (b. 1857 - d. March 16, 1919) whose name in English means "meddlesome one" or "mischief maker", is alternately spelled Nache, Nachi, or Natchez. He was the youngest son of Cochise and his wife Dos-teh-seh (Dos-tes-ey, - "Something-at-the-campfire-already-cooked", b. 1838).

His older brother was Tah-zay aka Chief Taza. Naiche was described as a tall, handsome man with a dignified bearing that reflected the Apache equivalent of a royal bloodline as the son of Cochise.

He was described as being 6'1" in height, which was tall for an Apache. He had three wives, Haozinne, E-Clah-he, and Na-deh-yole, and six children.

Upon the death of his father Cochise in 1874, Naiche's brother Taza became the chief; however, Taza died a few years later in 1876, and the office went to Naiche.

In the 1880s, Naiche and Geronimo successfully went to war together. In 1880, Naiche traveled to Mexico with Geronimo's band, to avoid forced relocation to the San Carlos Apache Indian Reservation in Arizona. They surrendered in 1883 but escaped the reservation in 1885, back into Mexico.

Officially the leader of the last band of renegade Apaches in the Southwest, Naiche and Geronimo surrendered to General Nelson Miles in 1886. Naiche and other Apaches requested to return to Arizona, while still imprisoned in Fort Marion. The US did not allow their return, but Kiowa and Comanche tribes offered to share their reservations in southwestern Oklahoma with the Chiricahua, so Naiche and 295 members of his band moved to Fort Sill, Oklahoma, where they became the Fort Sill Apache Tribe. In 1913, Naiche moved to the Mescalero Indian Reservation in New Mexico where he died of influenza.

Naiche had the reputation of being the finest Indian artist of that period. He painted his pictures on deer skin in color. His subjects were flowers, deer, other wild animals, turkey, and various objects of nature, as he saw them. He also carved canes from wood and painted them in different colors.