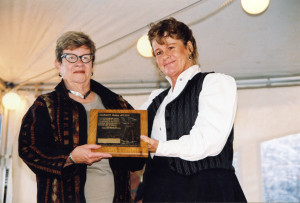 Lynn is co-author of an Arcadia Press Images of America book, a pictorial history of Globe. She is dedicated and passionate about community and history, and is also interested in fiber arts and music. Asked how she might compare herself to Sharlot Hall, Lynn responded “I, too, have spent years working to make my community as aware as possible of our history and the need to protect and exhibit what we have been left.”

The Sharlot Hall Museum is pleased to add Haak’s name to the roster of award recipients who include anthropologists and authors, educators and elected officials, folklorists and genealogists, historians and preservationists. For Lynn Haak, it’s “…a totally unexpected delight. All I can say is, thank you!”

Each year, the Sharlot Hall Museum offers recognition to an Arizona woman who has made a valuable contribution to the understanding and awareness of the Grand Canyon State and its heritage. This award is given in the true spirit of Sharlot Mabridth Hall, who was very much a forward-thinking woman of vision and daring living during an era when most women didn’t dare have any vision at all. By the sheer force of her personality and perseverance, Hall founded the Prescott museum which bears her name and brings to life the history of central Arizona.