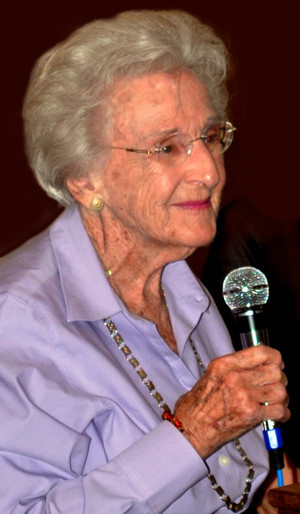 Prescott owes a great debt to Elisabeth Freidrich Ruffner.  She was instrumental in creating what has become one of the finest and most active local historic preservation movements in the United States, and in doing so cemented the town's historic and aesthetic appeal.

Elisabeth was born in Cincinnatti, Ohio.  As a young woman, she studied at the University of Cincinnatti and at Indiana University, and received library training.   She moved West to Prescott as a new bride in 1940, and began what on the surface might seem an unremarkable life, raising three children and contributing to her community wherever she could. However, when the community's needs called for strong leadership, she stepped forward and offered her time and energy.

In the 1950s, Elisabeth became the co-founder and president of the Prescott Community Hospital and Auxiliary, and as a board member, helped acquire the county hospital and establish a community-run institution.  In the early 1970s, the local library grew beyond the capacity of its deteriorating 1903 Carnegie Library building, so Elisabeth was among those who set in motion the bond drive that funded the new library building.   This in turn inspired the restoration of the old Carnegie Library to its former glory.  In 1973, Elisabeth co-founded the Prescott Area Arts and Humanities Council, and in 1974 became the founding president of the Yavapai Heritage Foundation, and both organizations became linchpins of community cultural life.  Preservation of the Bashford House by moving it to the grounds of Sharlot Hall Museum, and the establishment of a number of historic preservation districts, are some of the most enduring legacies left by Elisabeth Ruffner and enjoyed by Prescottonians today.

The file for Elisabeth's nomination for this award bulges with letters of support including several from former Prescott mayors, state historic preservation officers, historical association members, library board officers, and fellow citizens.  Each letter recounts incidents of Elisabeth's unselfish dedication to Prescott's proud historic past and the town's debts to her for their future.  The Sharlot Hall Award committee is proud to number Elisabeth Ruffner among the recipients of this honor.