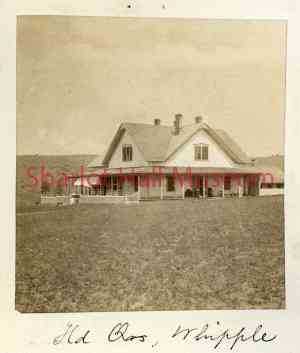 Last week we learned that General William Tecumseh Sherman planned to visit Prescott in 1878. He arrived at Fort Whipple about 4 PM on Wednesday, September 18 and was whisked off to a dinner at Dr. McKee’s, which included about a dozen guests. The next morning was spent on an informal inspection of the post, including a visit to the post hospital and a ride into Prescott to visit the town and the surrounding area. That evening was the military reception at the Fort, held in the almost completed building that was to be the commanding officer’s quarters for the Department of Arizona. According to the Weekly Arizona Miner for September 20, 1878, “All the rooms were handsomely decorated with evergreens, flowers and bunting.” The newspaper labeled it “…a perfect success.”

A personal glimpse of the General’s visit was written by Helen McGowan Biddle in her memoir Reminiscences of a Soldier's Wife. Biddle’s husband, James, was Inspector General of the Department of Arizona and on General Willcox’s staff. She wrote, “As soon as I heard the General of the Army was coming I wrote to Lieutenant Kingsbury and Lieutenant Baird asking them to send me some game, and a fish, if possible, from the Verde River, as I wanted to give the General a dinner. I received a note in reply telling me that some men would go the next day for the game, and that I should have the fish if they had to blow the river up to get it for me”. A few days later the wagon showed up with wild turkey, duck, quail and other game as well as two large fish. Lieutenant Kingsbury wrote a note indicating that he had some problems getting the fish and hoped the heads were not too ugly. She found out later that someone had thrown dynamite in the Verde River killing a number of fish.This sort of activity was frowned on as it wasted fish. Biddle was afraid her husband would find out and be upset; however, the perpetrators were not revealed, and the General was surprised and delighted to see fish on the table in the middle of Arizona. 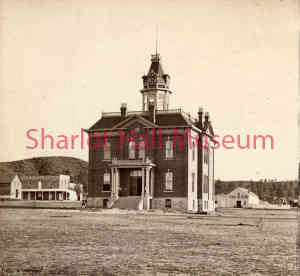 Friday was a full day of public appearances. The General made a short address to the students at the Prescott Free Academy, and this was accompanied by a program of student activities and speeches by other dignitaries. Sherman then received the public at the new courthouse from 12 noon until 2 PM, with all invited to come and pay their respects.

The evening culminated with a grand ball and reception. The September 20, 1878 edition of the Weekly Arizona Miner called it, “The greatest social event that ever occurred in Arizona was that which took place at the new theatre Friday evening in honor of Generals Sherman and McCook.” Military dignitaries arrived at 9 PM and festivities included speeches, supper and dancing.

After this whirlwind of activity, General Sherman boarded the stagecoach to Yuma as he continued his trip to San Francisco. In its October 4, 1878 edition the Weekly Arizona Miner reported on an article from the Yuma newspaper, “The Sentinal interviewed General Sherman at Yuma, en route to San Francisco, and gives this as part of the conversation: ‘He was charmed with the kindness and attention shown to him at Prescott. He did not say that he was surprised to find gentlemen there, but he did express surprise at finding as much culture and refinement on the frontier. Prescott quite got on the blind side of him.’”