Who Was the Mysterious “Arizona Bill”?

Historians generally accept (albeit hesitantly) that Raymond Hatfield Gardner was an Army scout during the Indian Wars. Beyond that, nothing about his life has been conclusively verified.  His genealogy has never been successfully traced, and his flamboyant stories have never been verified. It’s not even established that Raymond Gardner was his real name. Even the birthdate on his tombstone came from his own statements. 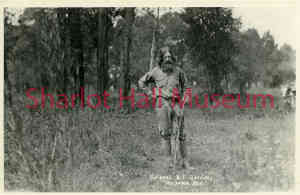 Gardner, who went by the nickname “Arizona Bill”, became a minor celebrity in the early 20th century as he drifted from town to town regaling citizens with exciting (and often contradictory) stories about his life in exchange for food, money and lodging. He kept this up for the last 30 years of his life. Usually accompanied by two burros, he dressed in frontier-era ragged clothes with hair and beard past his shoulders. “Arizona Bill” looked the part of the grizzled old soldier from a bygone era, becoming prominent enough throughout rural America that small-town newspapers reported on his visits.

Gardner’s most consistent tales were that he was kidnapped as an infant and raised by Comanche Indians, until returning to the white man’s world as a teenager and becoming an Army scout. He also claimed to be the only survivor of the Battle of Little Big Horn, saying that General Custer sent him on an errand before the fighting began (a story similar to those of other phony “survivors” of the battle). Gardner also claimed to be a Civil War and Spanish-American War veteran, and that he was an eyewitness to the capture of Geronimo, the Gunfight at the OK Corral in Tombstone and the secret meeting of New Mexico Governor Lew Wallace with Billy the Kid. He claimed he was held prisoner by the Jesse James gang for a month and to have personally witnessed Lincoln’s Gettysburg Address.

Today, “Arizona Bill” comes across as a tall-tale spinner, but rural Americans of the era, hungry for heroes, believed in him. The February 24, 1915, edition of the Prescott Weekly Journal Miner stated he is “well known in Prescott”, while the April 3, 1914, edition of the Coconino Sun reported that Gardner spent the winter camping and trapping in Yavapai County around Camp Wood, and they printed his claim of having bagged 72 mountain lions, 21 wildcats, 14 coyotes and 28 bear. The paper didn’t ask what he did with the pelts. 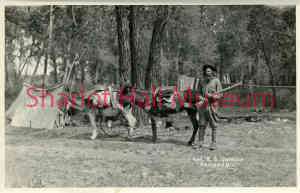 When “Arizona Bill” got sick, he was usually able to talk his way into various military or VA hospitals. But by the 1930s, this was getting more difficult, as the Army became more careful, and Gardner couldn’t prove he was a veteran. After being turned away from Brooke Army Hospital in Texas, Raymond Hatfield “Arizona Bill” Gardner died in a charity ward on January 28, 1940, in San Antonio and was buried in a pauper’s grave. If one accepts his claims about his age, he was 95 years old. Four years later, his memoir, “The Old Wild West”, was published. It’s filled with exciting and highly dubious stories. A copy can be found in the Sharlot Hall Museum Research Center.

Following Gardner’s death, George W. Miller, a former Army medic who treated and believed in the old scout, spent the next 35 years researching, desperately trying to find proof that “Arizona Bill” was an Army veteran. He finally located an ancient enlistment record for a Raymond Gardner and successfully persuaded the VA to act. So, Gardner’s body was exhumed, and on Veteran’s Day 1976, he was reburied with full military honors in Fort Sam Houston National Cemetery. But despite advances in genealogy research since then, the mystery of who “Arizona Bill” really was remains unsolved.