Much has been written and filmed about a complex and colorful cowboy named Tom Horn. Was he the upstanding citizen he claimed to be, or was he the criminal portrayed in print and film? Even today, people either admire him as part of a declining American frontier (like Butch Cassidy) or despise him as a hired killer of at least four men and a fourteen-year-old boy. 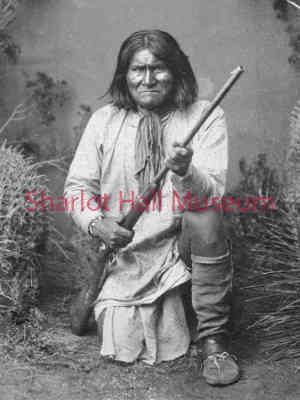 Thomas Horn Jr. (1860-1903) was the fifth of twelve children born to Thomas Horn Sr. and Mary Ann Maricha in Scotland County, Missouri. From an early age, according to Tom’s autobiography, Thomas Sr. verbally and physically abused him.

Fed up with mistreatment, Tom headed to the Southwest around the age of sixteen. As an adult, he stood six feet and weighed nearly 200 pounds. Normally soft spoken, he became loud and brash when consuming alcohol.

Arriving in Prescott in 1881, Horn became a teamster at Whipple Barracks under General George Crook. Crook had been assigned the difficult task of forcing the Apache tribes to their assigned reservations. At Ft. Whipple, Tom was hired by Al Sieber, chief of scouts, as an interpreter in 1885. While there, he quickly learned Spanish and several Apache dialects although some historians are doubtful. In his autobiography Tom says, “Al asked me to work with him as a Spanish interpreter… and I was tickled to go, so we set out for the San Carlos Agency…. There I learned and spoke Apache. The Apaches called me Talking Boy.” Horn later supervised 30-40 Indian scouts.

After becoming Chief of Scouts in 1885, Horn met the Chiricahua Apache Chief Geronimo near the San Carlos Indian Reservation in southern Arizona. It was rumored that Geronimo wanted to live on the reservation. Horn wrote, “Certainly a grand looking war chief Geronimo was…. six feet high and magnificently proportioned… with an intelligent face and eyes that were sharp and piercing.” Horn later escorted Geronimo to the Bowie train station for transport to exile in Florida. 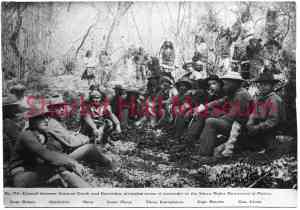 After the Apache Wars, Horn tried ranching and mining in Aravaipa Canyon in southeast Arizona. Ranching failed when thieves stole his entire stock of 100 cattle and 26 horses. The rustling caused Tom to go bankrupt, imbued him with an extreme dislike of thieves and may have contributed to his decision to become a range detective.

He next participated as a deputy sheriff in the Pleasant Valley War between sheepmen and cattlemen in northern Arizona with three famous Arizona lawmen: Buckey O’Neill, Perry Owens and Glenn Reynolds. Horn and Reynolds lynched three suspected cattle rustlers in August 1888 without arrest or trial. 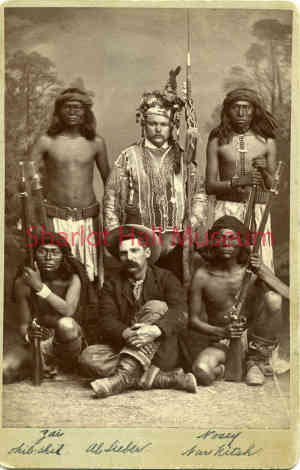 Tom claimed he mediated conflicts. As a deputy, he attracted the attention of the Pinkerton Detective Agency which hired him as a tracker in late 1889 or early 1890. Working from the Denver Pinkerton office, Tom handled investigations in the Rocky Mountains of Colorado and Wyoming. Tom’s record as a Pinkerton agent is inconsistent. In 1891 he made arrests but was detained by authorities allegedly for robbing a Reno casino. Only the influence of the Pinkerton Agency got Tom acquitted.

Later, Horn joined the Army during the Spanish American War. Assigned to manage the pack trains for Teddy Roosevelt’s Rough Riders, he contracted malaria before being sent to Cuba and was discharged from the Army. Other accounts say Horn made it to Cuba and supervised eight pack trains before contracting malaria and returning to the US.

Next week, Tom’s part in the Wyoming range war.