“To Drink or Not to Drink?” Part 2: Opposition to the Temperance Cause

[Article continues from the Days Past article published January 19, 2019]

In Prescott, Arizona, a community already home to “Whiskey Row”, there was no shortage of individuals who enjoyed partaking in alcoholic beverages.

For those who opposed temperance, arguments pointed to the joyful and social nature of drinking alcohol. As an anonymous writer of an opinion piece wrote in The Courier on December 15, 1883, “we never did believe in going without a friendly canteen, filled with something moist, not necessarily for the benefit of the canteen, but for our own comfort and delight. It is a pleasure to drink moderately when you are thirsty…. There are very few people in this world who do not like the taste of some beverage that is stronger than water.” 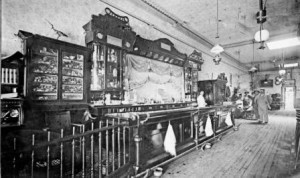 Although the author acknowledges that “it is a crime against self, nature and community for a man to resolve himself into a sponge, or an alkaline flat. Too much strong drink is not good for man or beast,” they later say “[I]t is, then, not against the use, but the abuse, of fire-water in all forms that our lovely female friends ought to war.” For the women in the WCTU, the writer encourages them to deal “with the tipplers gently; you cannot force them to terms at once” as they “are spunky and will fight for their grog.”

Advice later offered by the author revolves around late 1800’s notions of femininity, the Christian woman and the roles of women in public and private life:

“Begin with the members of your own families; reason with them; show them that you do not desire them to stop spending money for drinks … for the foolish ornamentation of your dear selves. If they are extravagant in the saloons; you should not be equally so in the fashion bazaars. Dress plainly, neatly; be moderate in your demands upon the purses of your fathers, husbands and others; prove to them that you are not selfish; that you are not crusading against the vice of drunkenness for notoriety and it may be that, in time, you will have exerted your influence over even the most thirsty male to good purpose; for there is, we hope, no man so defiled by liquor who has not among womankind a friend, perhaps a lover, who would not exert herself to have him brace up and be a sober man.” 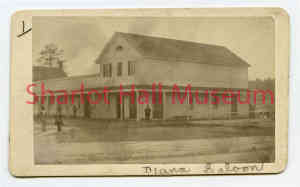 Even without pro-alcohol arguments, saloons in Prescott continued to open and their advertisements appeared regularly in the local newspapers. Published on December 15, 1883, in the Prescott Courier is this note: “Mr. Maier, late of John Raible’s Pacific Brewery, opens his saloon today, in his property on Granite Street, near the bridge.” The notice invites his “numerous friends and those who like to patronize him” for a lunch. On January 14, 1887, the saloons section of the Prescott Weekly Courier included ads for the Sazerac Billiard Hall, the Arizona Brewery Saloon, the Little Diana Saloon, the Union Saloon and Lodging House, Cob Web Hall, the Palace Saloon, and the Cabinet. The ads not only mention beer, wine and liquor, but also emphasize the social and fraternal nature of these establishments.

The Palace Saloon featured “first-class music every night” while the Sazerac Billiard Hall, Cabinet and Little Diana Saloon highlighted “comfortable” club rooms. The Billiard Hall also marketed itself as the “headquarters for mining investors” and referenced its new billiard tables.  Meanwhile, the Cabinet made readers aware of their lunch counter and dining rooms.

The debate regarding the consumption of alcohol and its effects on individuals, the family and American society would continue for many years. It would not be until 1920 that Arizona would become dry after the passage of the Volstead Act in 1919. Prohibition would last until 1933.