The Space Between: A History of the Sharlot Hall Museum Grounds

The construction of the Education Center illustrates how Sharlot Hall Museum has changed since it opened in 1928, although one consistent fixture is the Governor’s Mansion. Judge Henry Fleury occupied the Mansion until his death in 1895, when the building became rental property. In 1917, the State of Arizona acquired the Mansion for $7,000 due to the efforts of Tony Johns, and the City of Prescott agreed to maintain it for perpetuity. As plans were debated for the Mansion’s use (city park, museum or the headquarters of a veterans’ organization) the building’s physical condition deteriorated. 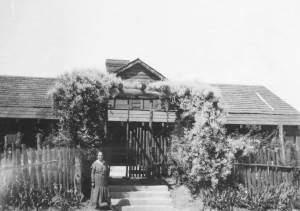 By 1927, Sharlot Hall signed an agreement with Prescott to install her collections in the Mansion as a museum. The State maintained the structure while the City provided utilities. In late 1927, Sharlot began restoration work and, in 1928, constructed a stockade fence of juniper poles (removed in 1954) with rustic entrance gates on the north and east sides. Most of the clapboard siding was removed from the Mansion, although restoration money was scarce during the Great Depression.

The 1930s saw increased construction and renovation at the museum. Construction of the Sharlot Hall Building began in 1933 by the New Deal agency, the Civil Works Administration (CWA), and was completed in 1936. This native stone and pine building was added as an exhibit hall with a small apartment for Sharlot, who then moved her residence from the Mansion. In 1934, the CWA built a replica ranch house. The following year, Fort Misery was disassembled and the logs moved to the museum grounds where workers reassembled it by 1936.

The fort is considered to be the first log cabin built in Prescott by trader Manuel Yrissari. Originally built in 1864 as a store, the structure also served as a courtroom, law office, and the site of the first religious services in Prescott. It was at the store that a public meeting was held on May 30, 1864, which resulted in the founding and naming of Prescott. 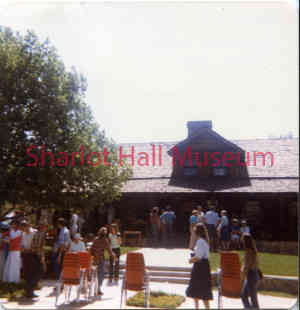 Roses and other plants adorn the Governor’s Mansion. The McCormick rose is named after Margaret McCormick, Governor Richard McCormick’s wife. In 1866, Margaret wrote in a letter that a California man had written to her that he had sent a number of rose bushes, which she believed would be the first cultivated roses in Prescott. Margaret planted the French rose Boursault and when Sharlot Hall moved into the Mansion, the rose was cultivated there. From her Orchard Ranch home, Sharlot brought in English ivy, the vines of which were first planted from cuttings sent from Blarney Castle in Ireland.

The Territorial Women’s Memorial Rose Garden, a distinctive feature of the museum grounds, was designed by Dorothy McMullen in 1948 and the first bushes were planted by the Yavapai Cowbelles in March of that year. With the board’s approval, the Prescott Garden Club and Alta Vista Garden Club began physical work on the garden.

By the 1950s, 120 donated rose bushes of 30 different varieties were planted south of the Governor’s Mansion. Each bush had a marker with an individual woman’s name, the date she entered Arizona, the donor’s name, and the rose name. In 1974, the garden was moved from its original location south of the Mansion to the north side. 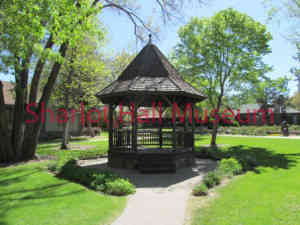 Today, the garden as a whole honors more than 400 women, both pioneer and Native American, who resided in Arizona during its Territorial years and contributed to its settlement and development.

Since 1981, the Sharlot Hall Museum grounds have been cared for by Steve Whitley, a groundskeeper for 38 years and the museum grounds supervisor for 36 years. During his tenure, the Gazebo was constructed in 1985 and the Amphitheater built in 1995. Currently he is assisted by 10 volunteers who keep the museum campus beautiful.

Join us for a free lecture by Steve about the museum grounds on Saturday, September 14 at 2 PM in the West Gallery in the Lawler Building.