Fred Harvey became a restaurant entrepreneur as a young man, beginning with his arrival in New York City from London in 1853. In New York he worked in a variety of restaurant jobs. Moving west, he opened the first of his own restaurants in St. Louis, MO. He developed his connection with the Santa Fe Railroad through various entrepreneurial ventures, with the railroad building restaurants and hotels and Fred supplying the furnishings and food service and running them and managing their operations, along with the railroad dining cars, along the Santa Fe line from Chicago to Los Angeles. As the Santa Fe Railroad moved west, so did Harvey’s ideas.

Fred realized there was a need for travelers to have good quality, well-prepared food in clean, upgraded facilities. He wanted to provide the freshest produce, milk and eggs. The farther the railroad went, the harder it was to find fresh local products for the Harvey eateries and dining cars.

As early as the 1880’s, Harvey began setting up farms along the train routes to ensure availability of fresh local food. By 1884 the Santa Fe had reached as far as Peach Springs, Arizona. A Harvey eating house was established there, as well as a dairy. In 1887 the Santa Fe expanded its line south to Texas. In Temple, Texas, there was a large Harvey House in the train depot, as well as a dairy, fruit and truck farm. In 1905 a Fred Harvey Farm was established in Newton, Kansas, which became a major processing center.

During the late 1880’s, the Santa Fe, Prescott and Phoenix Railway extended south from the main east-west line at Ash Fork through Chino Valley to Prescott. In 1898 the Santa Fe acquired a 99-year lease for water rights at Del Rio Springs. The railroad transported water from there to locations along its northern lines, including the Grand Canyon. With water from Del Rio Springs, Harvey and the Santa Fe Railroad were able to realize their goal of making the Grand Canyon a popular tourist destination.

In 1909, as part of the ongoing plan to provide fresh local ingredients, the Santa Fe Railroad and the Fred Harvey company purchased 3,250 acres of land at Del Rio Springs in Chino Valley and established dairy and poultry facilities there called the Fred Harvey Farm at the ranch at Del Rio.

By 1913 several structures were completed at the Farm. Joining the old adobe house that had been an early settler’s home were barns, a milking barn and the bunkhouse. The Harvey Farm supplied all the milk and eggs to the western division of the Harvey Restaurant operations and Santa Fe dining cars.

George Converse and his family came to Del Rio to manage the Fred Harvey Farm in 1926. They lived in the old adobe house and his wife Grace fed the crew in the bunkhouse. Their children all grew up on the ranch, helping with the haying and tending the 5000 turkeys raised for the Fred Harvey company during the war years. 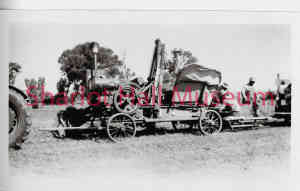 Seven to eight tons of hay a year were produced by the ranch, half of it going to the Grand Canyon to feed the mules and horses. In addition, the famous Grand Canyon mules wintered at the Harvey Farm. Mr. Converse fed and groomed them, so they were in fine shape upon their return to the Canyon.

The Harvey Farm operated for nearly 50 years until it was sold in 1956. Succeeding ranch owners maintained the ranching tradition, and nearly all the structures on the ranch are from the Fred Harvey Farm period. The historic Del Rio Ranch and Harvey Farm contribute to our local history, Fred Harvey and railroad history and Grand Canyon history.

This article is a preview of a presentation Kay Lauster will make at the Sharlot Hall Museum Education Center on Saturday, May 8th, 2021 at 2 PM. The presentation is open to the public free of charge on a limited-seating basis. Face coverings are required.