The Misadventures of Angie Mitchell

The past two years have been challenging for our teachers and students alike in dealing with the invisible danger of Covid 19.

However, back in 1880, the dangers young Angie Mitchell faced in the wilds of the Arizona frontier were very visible and physical. They were certainly more adventurous than she expected when she agreed to teach in a new Tonto Basin school near present-day Roosevelt Dam.

Angeline Mitchell had been living with her parents in Prescott since 1875. Before moving, she taught in several Kansas schools. After her arrival in Arizona, she continued to teach in Prescott and live comfortably. However, after a dispute with her fiancé, George Brown, she signed up for a teaching position in a more primitive setting.

Her first adventure was the trip to Tonto Basin after she convinced George to drive her and her mother there. They left September 14th. The first few days were uneventful, traveling to Fort Verde, up Crook’s Military Trail to Government Wells and then on to Strawberry and Pine Creek where they spent a night with a Mormon family. The next day, the father advised them to follow the established route to Green Valley (later called Payson). However, another rancher arrived and suggested a shorter route along an old “army road.” To shorten their travel time, they chose the “short-cut.”

It proved difficult from the start. When the trail traversed a steep mountain wall, the trip could have ended tragically. When they looked over the side of the cliff, 75 feet below, they saw the remains of a wagon and several horses. After they got out of the wagon, George circled it with a system of joined harness straps and halters. He held onto the front lines and led the horses. Angie was instructed to hold tight to the stabilizing lines at the rear of the wagon while leaning up hill. She was to let go if the wagon and team started slipping.

Twice the wagon almost went over the edge. George, however, had repacked their heavy items on the uphill side of the wagon, so disaster was averted. Once safely around the mountain, they still had a rough, steep descent to the East Verde River where they found a little valley and a log cabin, the home of Mr. and Mrs. Fuller. Mr. Fuller was the rancher who had suggested the short-cut. Mrs. Fuller confessed, “He is my husband and it’s not the first trick he played on people, though I believe it is one of the meanest…”

After rough nights camping nearby, they arrived at Tonto Basin and the Blake ranch where Angie was to stay until the new school and teacher’s house were finished.

Besides the adventure of teaching as many as 23 children of varying ages in a 10 by 12 foot schoolhouse with dirt floors and brush walls, Angie continued to have other misadventures the few months she taught there. 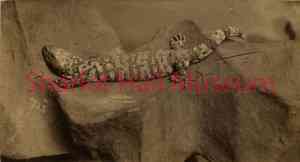 One day, as she sat on a stool in front of the students, she felt a tugging on her skirt. Looking down, she saw “as hideous a reptile as I’ve ever seen.” With a yell, she jumped on her stool and “the commotion that ensued beggars description.” The older, more experienced children laughed, telling Angie it was nothing more than a Gila monster. So, since the reptile lived in a hole near her desk, Angie had little choice but to adjust to him in her classroom. She recounts, “I’ve taken to picking him up gingerly by the tail and putting him on the back of my desk where he lies out at full length in the sun.”

Angie survived her time in Tonto Basin with fortitude and good humor, but when Christmas break came, she made her way back to Prescott over bad roads in pouring rain, and did not return.