The Grismers: A Dynamic Duo on the Stage of Howey’s Hall

In the 1880s, Prescott had only one “opera house,” the tiny theater on the second floor of the building designed and constructed by James Howey in 1879. Levi Bashford bought the building in 1880 and, in 1887, created a theater with a stage only 10 feet deep and about 30 feet wide.  The seating capacity was about 250.  Despite the cramped quarters, professional theater troupes occasionally performed there.

One such troupe was the renowned San Francisco Grismer-Davies Company, headed by the most respected duo in the city:  Joseph R. Grismer and his lovely wife, Phoebe Davies.  They arrived in Prescott via the Atlantic & Pacific Railway in January 1888 and presented a trio of melodramas:  The Streets of New York, The Wages of Sin, and Called Back. 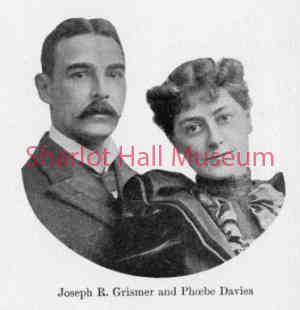 A Civil War veteran on the Union side, Grismer became the leading man at the prestigious Baldwin Theatre in San Francisco.  There he met Phoebe Davies, a Welsh-born actress who played everything from Shakespeare to Boucicault.  He married her in 1883 and organized a company wherein the two shared credit as joint stars in a vast repertoire of plays through 1898.

The beloved couple’s Prescott engagement—January 30-31 and February 1, 1888— commenced with Grismer’s dramatization of Hugh Conway’s popular novel, Called Back.  It told the story of Mr. Gilbert Vaughan (Grismer), a wealthy but blind Londoner who unwittingly stumbles into a strange house while a murder is being committed there.  The victim’s sister, Pauline (Phoebe Davies), is so traumatized by the crime that she loses her senses. Vaughan regains his eyesight and strives to restore Pauline’s sanity and bring to justice the villains who caused her affliction.

In Boucicault’s sensational melodrama, The Streets of New York, Grismer played Badger, the bank clerk who helps to bring down the unscrupulous New York banker, Gideon Bloodgood.  Davies played Alida Bloodgood, the villain’s selfish, egotistical daughter, who steals the heart of the naive young hero, Mark Livingstone.   She squeezes a marriage proposal out of him before he realizes how vain and contemptible she is and how much he loves Lucy Fairweather, a poor girl who struggles to support her aged and sick mother. 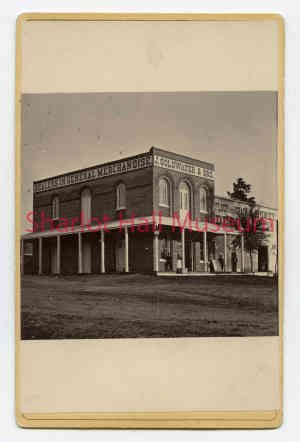 This drama was too spectacular to be contained on the stage of the Prescott Opera House.  The great “sensation” scene, where the hero and firemen rescue Lucy and her mother from a blazing tenement building, fell flat.  Grismer and Davies had roles in Badger and Alida that showcased their talents to the utmost, but the play failed to impress the people of Prescott.

Frank Harvey’s melodrama, The Wages of Sin, tells the story of Ruth, an orphaned ward who consents to marry the villain, Harry Wentworth, because she is convinced that the man she truly loves, George Brand (Grismer), has betrayed a poor girl. Wentworth treats his wife badly, drives her to starvation and crime and abandons her. Finally, when she hunts him down to bring him to justice, he tries to kill her.  But her true love comes to her rescue.  Miss Davies’ pathetic rendering of the worse-than-injured wife was exceptional and brought tears to many an eye.  Mr. Grismer’s hero was perfect.

An amusing commentary from the Arizona Journal-Miner exposed the prudish Victorian attitude towards the theatrical profession: “Mr. and Mrs. Grismer (Miss Davies) are not only great favorites on the stage, wherever they play, but combined with the genius and ability of good players, they are possessed of the polished manners and refined culture of a perfect lady and gentleman, which win for them, not only the respect, but the love of those with whom they become acquainted, and they form a happy illustration of the fact, that their chosen profession is not incompatible with leading a life of purity, sobriety and refinement to those who desire to do so.” (Feb. 8, 1888)

Tom Collins is the author of several books on the theater in Territorial Arizona. This article is a preview of a presentation he will make at the sixteenth Annual Western History Symposium that will be held at the Prescott Centennial Center on August 3rd. The Symposium is co-sponsored by the Sharlot Hall Museum and the Prescott Corral and is open to the public free of charge. For more details, call the Museum at 445-3122 or visit the sponsors’ websites at www.sharlothallmuseum.org and www.prescottcorral.org.

“Days Past” is a collaborative project of the Sharlot Hall Museum and the Prescott Corral of Westerners International (www.prescottcorral.org). This and other Days Past articles are also available at https://sharlothallmuseum.org/articles/days-past-articles.l. The public is encouraged to submit proposed articles and inquiries to dayspast@sharlothallmuseum.org. Please contact SHM Library & Archives reference desk at 928-445-3122 Ext. 2, or via email at archivesrequest@sharlothallmuseum.org for information or assistance with photo requests.