The Dynamite Attack on J.S. Acker

For residents of Prescott today, J.S.Acker is remembered most warmly. Due to his philanthropy, the popular annual downtown music festival held during the holiday season is named in his honor. However, while he was alive, most considered him to be a bit cranky and cantankerous.

So when three dogs were found dead outside the Acker house, someone thought the worst- that Acker purposely tried to kill the canines.

It all started with pesky rodents and a violent storm. Acker wanted to rid his house and outbuilding of the pests. So, he bought some cheese, put poison on it, and set it around his property.
However, when a violent storm blew down a section of Acker’s fence, it opened his yard to wandering pets.

Scuttlebutt quickly grew into a belief that Acker’s dog was in heat and Acker purposely opened his fence for male dogs to consume the poison. Exaggerations swirled that instead of three, the old coot killed 19 dogs!

Then, during the night of April 21, 1917, someone tried to throw a stick of dynamite through the Acker’s parlor window. Fortunately, the explosive fell to the ground before exploding.

“By a miracle no one was hurt,” the Weekly Journal-Miner exclaimed. Mr. and Mrs.Acker were awakened by the blast and they immediately telephoned the sheriff’s office.

The blast “ripped loose all the boards at the north end…and shattered every pane of glass in the parlor windows.” The blast also shattered the windows of nearby houses and “was plainly heard all over the town.”

Acker told the Weekly Journal-Miner he was baffled by the attack and had no idea who the culprit might be. He should have felt fortunate. It was determined that had the dynamite gone through the parlor window it could have brought the entire wooden structure down with the Ackers still in it.

When no witnesses were found, Acker personally offered a reward of $500 for the capture of those responsible. The Yavapai County Board of Supervisors quickly matched the amount, making the total reward worth about 5 months pay for the average man then. The investigation seemed promising at first, but quickly went cold. “The sheriff’s office continued…trying to get together facts in connection with the outrage, but was unable to locate anything on which a case might be hung,” the Weekly Journal-Miner reported. 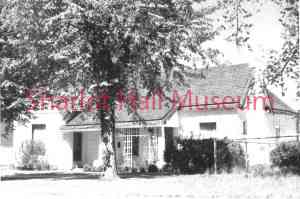 When the rumors of the 19 dead dogs finally reached Acker himself, he was flabbergasted. He immediately wrote the Weekly Journal-Miner to quell the gossip. After revealing what really happened, Acker declared: “I…state positively that if any dog was poisoned on my premises that it was wholly an accident and without design or intention on my part, and furthermore that I am an owner and admirer of dogs, and would be the last person in the world to cause the death of anyone’s dog by poison.”

Some wondered if the dynamite was thrown at the parlor window, or if it was placed at the foundation. The difference being key to the motive of whether a warning was meant or the intention was maiming or murder.

However, it seems that if someone had made the sound of opening the front gate and started skulking under the parlor window, nearly every canine nearby would have a conniption. Yet, this did not occur. Therefore, it is far more likely that the dynamite was thrown and the intention was more than a warning.

In any event, Acker’s cooling explanation, in conjunction with the heat of the law, stopped any further attempts at revenge. The culprit was never captured and the incident fell into obscurity.

This article is a preview of a presentation Brad Courtney and Drew Desmond will make at 10 AM at the Seventeenth Annual Western History Symposium that will be held at the Sharlot Hall Museum Education Center on November 7tht. The Symposium is co-sponsored by the Sharlot Hall Museum and the Prescott Corral of Westerners International and is open to the public free of charge on a limited-admission basis. Face coverings are required. The presentations will also be streamed “live” on the website. For more details, call the Museum at (928) 277-2015.