The Birdman of Fort Whipple

Dr. Elliott Ladd Coues was truly a “Renaissance” man, serving as an Army doctor, naturalist, historian, ornithologist (study of birds) and author of numerous books in his lifetime. 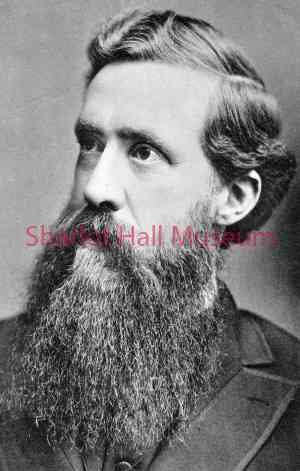 Born on September 9, 1842, Elliott Ladd Coues graduated from Columbia College, Washington, D.C. in 1863. On March 30, 1864, he was commissioned an Assistant Surgeon in the U.S. Army (equivalent to First Lieutenant). In August 1864 he arrived at Fort Whipple in Prescott in the new Arizona Territory. In their book, Elliott Coues, Naturalist and Frontier Historian, Paul Russell Cutright and Michael J. Brodhead quote Coues’s letter to his mentor Spencer F. Baird, Asst. Secretary of the Smithsonian Institution, describing his arrival at Fort Whipple: “I have just arrived here and assumed charge of the Hospital and I am at present busy getting official matters in order, - which will occupy me for a few days. I will then get settled in my tent, - we have nothing else to live in,- and shall try to prosecute Nat. Hist. with the same animus with which I left Washington for this country.”

On Aug 24, 1864, the Arizona Miner reported that Dr. Coues was recently assigned to this department (the Military Department of Arizona). It went on to characterize him as “.. an intelligent and enthusiastic naturalist, he will occupy his leisure time in investigations, which we will hope result in the preparation of a work upon the natural history of Arizona. The field is new and inviting. Our citizens finding curious specimens of insects, reptiles, birds and plants, will do well to send them to Dr. Coues.”

During his military travels and personal trips throughout Arizona, he observed and described numerous birds and other animals, often collecting specimens. On October 23, 1865, Dr. Coues left Fort Whipple to assume military duties in Washington, DC.

In 1871 he joined the “Wheeler Survey,” a government team charged with mapping the southwest US (the territories of New Mexico, Arizona, Nevada and Utah). From July 1876 until 1880, Dr. Coues served as Secretary and Naturalist for  F. V. Hayden’s U.S. Geological Survey of the territories of Wyoming and Colorado. During these surveys, he collected numerous animal specimens, especially birds, meticulously documenting their descriptions and habits.

In 1880 he was reassigned to Fort Whipple (now Whipple Barracks) as a medical officer despite his reputation as “America’s most well - known ornithologist.”  In 1881 he resigned his commission to pursue his scientific studies, particularly in ornithology. Starting in the 1890s, he wrote a series of 15 volumes describing animals and plants he discovered during his travels throughout Arizona and other southwestern territories.

Dr. Coues was one of America’s most renowned ornithologists and naturalists. In 1861 he was made a corresponding member of the Academy of Natural Sciences of Philadelphia at the young age of 18. In 1877 he was elected a member in the National Academy of Sciences, the youngest person to receive this honor. While visiting Prescott in 1891, he strongly advocated in the local newspapers for the formation of a local historical society. On March 2, 1892 the Weekly Journal-Miner announced the formation of the Prescott Historical Society with Dr. Coues as its Honorary Chairman. On December 25, 1899, Dr. Elliott Ladd Coues died in Maryland
.
During his travels in Arizona, he discovered a subspecies of White Tail deer, subsequently named the Coues Deer after him; the Arizona Gray Squirrel, a tree squirrel; and the Cactus Wren, a bird that nested in cacti, specifically the Saguaro cactus. Though he did not live to see it, the Arizona Legislature designated the Cactus Wren as the state bird in 1931.