The Bicycle or The Horse?

Today, the bicycle is a recreational vehicle. From the late 1800s until early 1900s, people saw the bicycle as a new, exciting form of personal transportation, less expensive than a horse and perhaps faster. 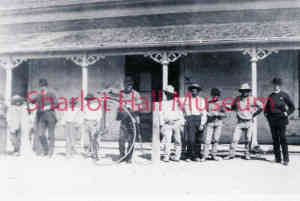 In the 1870s, the “ordinary” or “Penny-Farthing” bicycle was available. To mount, the rider gripped the handlebar, stepped on a small step on the back of the bicycle, pushed off with his right foot and lunged forward, hopefully landing his feet on the pedals and his rear on the seat. Using pedal speed to slow down or stop, to dismount, the rider reached back with his foot to the small step and hopped off. Many novice riders stopped too abruptly and did “headers” over the handlebars. Average people found the “ordinary” bicycle difficult to operate and dangerous to ride.

By the late 1880s, the “Safety” bicycle took over the U.S. market. Revolutionary in its design with front and back wheels of equal size, the Safety bike was widely accepted throughout the country, including Arizona. The March 20, 1895 Weekly Journal Miner reported “The bicycle is growing in favor in this section, and all hands are catching the craze.”

In 1895, Mr. Murray McInernay, store owner, began selling and renting these bicycles in Prescott. On July 3, he organized a bicycle club of 45 members, each paying $2 per week. The October 3, 1895 edition listed high grade bicycles for gents or ladies for $56.50. A “good” saddle horse cost around $200.

Bicycle events were frequently reported in the Weekly Journal Miner. The May 16, 1894 paper reported the Governor’s wife was seen riding a bike in her “bloomers”. The June 27 paper reported “Mr. Charley Akers has a bicycle built for two.” The September 4th paper reported “They have invented a bicycle lawn mower.” 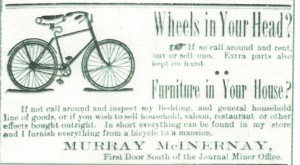 Bicycle racing was popular in Prescott. The May 22, 1895 Weekly Journal Miner announced racing on Page 1. In October, it was mentioned three times, including a “twenty-mile bicycle race”. People wondered if a bicycle was faster than a horse. There were several races between wheelmen and  horsemen throughout the country; none answered the question, as rules and conditions differed. In the 1890s, Buffalo Bill Cody staged the most famous such race in Milan, Italy, racing an accomplished bicyclist for 3 hours. The rules allowed him to change horses, while the bicyclist remained on the same bike. Cody won by riding 63 miles while the cyclist completed only 61.

The U.S. Army experimented with replacing horses with bicycles for carrying messages and possibly in cavalry units. The 25th Infantry Bicycle Corp, comprised of African Americans led by white commander Lt. James Moss, was formed in 1896 to test the combat viability of bicycle mounted troops. In 1897, Lt. Moss, accompanied by Assistant Surgeon John Kennedy, led 20 troops on one of the longest and most grueling cross-country bicycle trips ever made. They traveled from Missoula, Montana to St. Louis, Missouri, covering 1900 miles in 40 days and averaging 52 miles a day with full packs and weapons under horrendous road and weather conditions. The Army concluded bicyclists were twice as fast as horsemen over the same distance.

Bicycles were not accepted by everyone. The September 27, 1893 Weekly Journal Miner voiced a litany of complaints about wheelmen being “grossly careless” riding on sidewalks, unnecessarily scaring horses, ringing their bells to frighten pedestrians and “cruising down Gurley Street at 20 to 30 miles per hour.” Bicycle accidents were frequent; on June 5, 1895, the paper reported three separate accidents.

Despite drawbacks, the bicycle increased in popularity until early 1900s when it and the horse were largely displaced by automobiles. Both the ordinary and the safety bicycle are displayed in the Transportation Building at Sharlot Hall Museum.