The Grand Canyon National Park is celebrating its centennial this year.  Prescott’s own Sharlot Hall visited the Grand Canyon even before it became a national park in 1919. 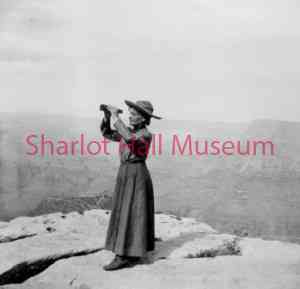 In 1893, Sharlot was one of eight people taking an extended camping trip from Camp Verde to the Grand Canyon.  In her journal, Sharlot documented many of the sights along the way, the flora and fauna, the weather and others they met en route.

Her most eloquent prose described the Canyon: the turret-like promontories, the rock masonry terraces, gently sloping mesas, pinnacles resembling statues on giant pedestals, water-washed caves and the soft blue haze that shrouds the Canyon’s impressive depths.  She and her party hiked seven miles down, nearly to the Colorado River, and Sharlot and a companion hiked back up the same night.  The rest of the group climbed up the next day.

Sharlot wrote several poems about the experience.  She concludes “The Wail of the Weary Eight” with the stanza:

When we next see the Cañon, we’ll come to the top
Quite contented to view the whole thing and then stop.
The bottom’s all right and the river to boot
But we know all its beauties by heart and by foot.
With a knowledge dear-bought in experience’s school
If I go down again please just label me “fool.”

In the January 1907 issue of the journal, Out West, Sharlot wrote of a December journey to the South Rim to spend Christmas Eve in the Canyon. Apparently time had erased the weariness, and she seemed more confident this time; in fact, having arrived with her party at the river, she stole away from her group to enjoy solitude on the trail back up.

My heart beat fast – not with fear, though there was danger, but with pure joy of daring.This night was mine, and the voice of the River went with me, singing a great Valhalla chorus flung up the mighty walls to the dark, over-leaning forest above.

On Christmas day, after she and her party enjoyed a festive dinner, she ventured again into the dark and that “white, silent hour when the air seemed full of whispering voices; not the wild hymn of the beasts, but that greater call of the Unknown that has haunted the hearts of men in City and Wilderness alike…” 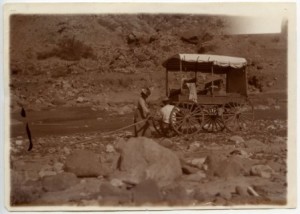 During the time Sharlot served as Arizona’s territorial historian (1909–1912), she visited many sites in Arizona.  In 1911, Sharlot and a guide took a ten-week wagon trip across the Arizona Strip, the wilderness that lay between the Colorado River and the Utah state line.  They spent twelve days on the Kaibab Plateau and the North Rim of the Grand Canyon.

While much of her focus was on the resources of the region – in order to make a compelling argument that Utah not be allowed to annex those lands – she also praised the natural state of the land:

Of the scenic beauty of this region it is impossible to say enough; the northern rim of the Grand Canyon is incomparably grander than its southern mate and it is cloaked to the very brink by as noble a forest as can be found in the Southwest.

She marveled, standing on the North Rim looking to the South Rim, that it was only fourteen miles away but nearly five hundred by the wagon road she had followed.  She described the view as being “awe-inspiring in its vast and varied sweep, its gorgeous colors veiled in the ever-changing blue haze, the almost bottomless gorge between making it seem like a view across some stranger planet.”

During this Centennial anniversary of the Grand Canyon National Park, we owe gratitude to the early visitors to the Canyon who knew that it was worth protecting.