Today we take electricity for granted. We only realize how essential this utility is when a power outage occurs. We are, pun intended, literally in the dark when appliances, lighting and heating/cooling systems do not function.

In 1894 Prescott Electric Company provided the first electrical service for Prescott using steam-generated power. By the early 1900s, as central Arizona communities and the mining industry expanded, the reliability of electrical service became increasingly important. This occurred with the construction of the Childs-Irving hydroelectric power plants on Fossil Creek.

Water rights to Fossil Creek were originally purchased by rancher Lew Turner in 1900. He hoped to harness the hydroelectric power to sell for mining purposes. The Arizona Power Company (TAPCO) then made plans to construct hydroelectric plants on Fossil Creek . The Childs plant (built in 1908-1909) was named for Starling Winston Childs, a Yale graduate and bond broker with William P. Bonbright & Company. The Irving plant (built in 1915-1916) was named for Bonbright co-founder Irving Bonbright. The bonding company funded the projects.

In 1907 TAPCO formed the Electric Operating Construction Company to build the Childs power plant and electrical distribution system to serve Prescott and the mines around Jerome. Raymond S. Masson, an engineer from Los Angeles, became the chief engineer in charge of construction. He was instrumental in the design of the electrical distribution system, which was noted to be efficient and reliable. 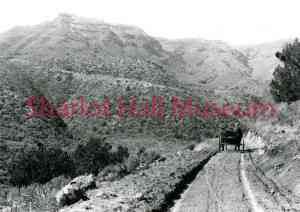 A TAPCO office was set up in Prescott. Its first task was construction of a road to the power plant site. Picks, shovels, wheelbarrows and dynamite were the only tools available to build a 40 mile road over very rough terrain. The road was to start two miles south of Mayer at Bradshaw Mountain Railway’s Blue Bell Siding, the nearest railroad siding able to receive supplies and construction materials for the power plant and transmission lines. Road construction began in April 1908 using 60 men. Heading eastward, the road descended 3,500 feet over the last eight miles to the power plant location. The road was completed in July of 1908 and cost $39,900 ($1.12 million in today’s dollars).

Burros and mule-driven wagons were used to haul materials for the power plant, including cement, steel pipe, transformers and major electrical generator components. A round trip took five to six days.

Steel lattice towers were selected over wooden poles for the transmission lines. Towers designed specifically for transmission lines had not yet been developed, so prefabricated steel windmill towers were used. 700 windmill towers, each weighing 1,240 pounds, were purchased from a company in Illinois. These towers could be transported in pieces by wagons or pack mules and assembled in place.

On June 18, 1909, the Childs plant began providing power to the mines near Jerome. The November 4, 1909 edition of the Arizona Journal-Miner noted the transmission line to Prescott was about two miles from the center of town. The January 23, 1910 edition reported that electric power was connected to Prescott Electric Company’s main plant on January 22nd. 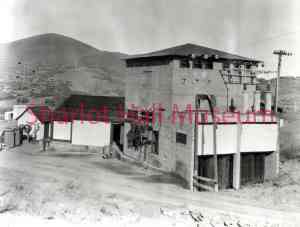 Today an electrical substation at Poland Junction still remains active in a smaller role. Original components and all transmission towers have since been replaced. The road built to the power plant follows Dugas Road and Forest Service Road 68E.

The Childs-Irving power plants were designated National Historic Mechanical Engineering Landmarks and are listed on the National Register of Historic Places. Decommissioned in 2005, both power plants’ infrastructure was removed, thus restoring the river’s original flow and ecosystem.