Like the modern day “big one,” when the San Andreas Fault finally makes that dreaded big slip and wreaks its long-predicted devastation, a fire of frightening magnitude was not a question of “if” but “when” in young nineteenth-century Prescott.

In April 1888, a Prescott Courier editorial described the unrelenting danger: “The people of Prescott can look back and thank the gods that fire has not ‘devoured’ a great deal of their property. We now tell our people that the hot, dry season which may last until next July is upon us; that there will be windy days and nights when, should a fire get a good start, it would be hard to check.” So it was that hot, dry night of July 14, 1900. 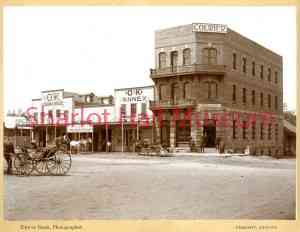 Modern-day Prescott and its famous Whiskey Row were shaped by three major fires. If the Whiskey Row fire of 2012 is counted, that makes four.

The fires of July 6, 1883, and February 14, 1884, fashioned the Whiskey Row that was present on July 14, 1900. During the evening of the latter date and the early morning thereafter, a fire ignited from a fallen candle that grew to nearly mythical dimensions and intensity. By the early morning of July 15, all that had been rebuilt after previous fires, and much more, was gone.

Prescottonians who witnessed Prescott’s July 14–15 conflagration of 1900 often simply called it the “big fire.” Sometimes it is referred to as the “Whiskey Row Fire.” That is because Whiskey Row—morphing into one version and then another throughout its early history and even after being rebuilt in 1901—was historically more than the quarter city block sectioned off today for visitors on Montezuma Street between Gurley and Goodwin Streets. It was a broader area, and almost all of it burned down that fateful evening.

Most regularly, however, it has been called the “Great Fire.” Great and terrible it was indeed. The Arizona Weekly Journal-Miner, whose headquarters was one of the Great Fire’s victims, claimed, “No such stroke as this had ever been laid on an Arizona town. In comparison, considering wealth and population, the much more famous Chicago fire of 1871 was an insignificant blaze, for little of Prescott remains but its homes.” The heart of the mountain town was gone. 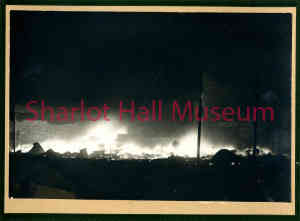 It has been called “an ill-fated night” and the greatest disaster in Prescott’s history. Up to that point and long after, surely it was. Over and over, however, it has been said that the people of Prescott took the results in a philosophical, almost jubilant manner.

With the birth of this Central Arizona Highlands hamlet in 1864, the seeds were planted for what became Whiskey Row. July 14, 1900 would prove to be the eve of rebirth for Prescott and its Whiskey Row, both refusing to be buried in their ashes. In fact, Prescott dates its current history from the Great Fire’s ugly baptism. The rebirth of Prescott and Whiskey Row began immediately on July 15, 1900. Within a year’s time, most of Prescott had been rebuilt in a much more substantial and aesthetic manner. The Great Fire was, without question, the pivotal event of Prescott history. 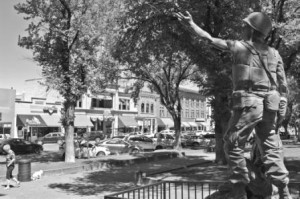 Today, residents and visitors are the benefactors, often unknowingly, of the resolve that fueled early twentieth-century Prescott’s amazing rebuild—a Phoenix-like resurrection from flame and ash.

Brad Courtney, author of Prescott’s Original Whiskey Row and The Whiskey Row Fire of 1900, will be sharing stories about the Great Fire of 1900 and signing books at the Sharlot Hall Museum, west wing of the Lawler Building, on February 29 at 2 p.m. Admission is free.