Once in Kunming with the AVG, Frank flew with both the First (Adam & Eves) and Second (the Panda Bears) squadrons. He attained the rank of Deputy Squadron Commander of the Adam & Eves and was credited with seven Japanese planes destroyed.

After the Flying Tigers were disbanded on July 4th, 1942, Frank remained in China with four other members of the AVG and was officially absorbed into the United States Army Air Force. On July 5th, 1942 they were assigned to the 14th Air Force, 23rd Fighter Group. Frank became Commander of the 74th Fighter Squadron under Group Commander Col. Robert L. Scott and was immediately promoted to Major. The 23rd Fighter Group was assigned to the China Air Task Force under Brig. General Chennault, the AVG’s originator. 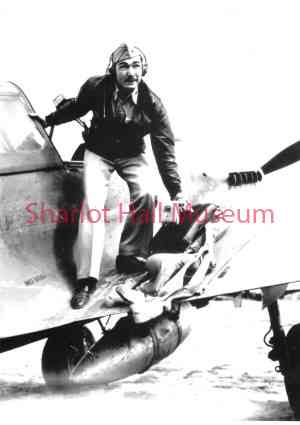 As a reconnaissance specialist, Frank flew legendary medal-winning missions. On September 13, 1942, he was assigned to fly to Hanoi, 340 miles south of Kunming, to photograph the Japanese airfield with an aerial camera. No sooner had he finished when he encountered three Japanese fighters within firing range rapidly bearing in. Knowing he had to bring back his valuable photos, he was able to evade the enemy with his skillful maneuvering and knowledge of enemy tactics.

The photographs were of high military value, enabling bombers to stage one of the most effective raids on enemy positions in the China theater. General Chennault awarded Frank, one of his finest pilots and navigators, the Silver Star for his outstanding work.

On October 7th, 1942 Frank flew a stripped-down P–40 down China’s coast for more than 8 hours to observe and photograph enemy installations and shipping lanes. He was awarded the Distinguished Flying Cross for this mission.

One of his greatest exploits, however, was a 2200 mile reconnaissance flight in one day, mostly above 30,000 feet, in enemy territory in bad weather. He left Yunnan, flew to the Japanese base at Hanoi, then to Haiphong, then to the Gulf of Tonkin, then to Hainan Island, then to Sanchau Island, then to Hong Kong and Canton, all while outmaneuvering Japanese planes and  taking photos at each stop. He even flew 250 miles over water to avoid alerting the enemy. He finally arrived back in Kunming and gave his photographs and report to General Chennault.

The Chinese, grateful to one of the handful of Americans who did so much for their nation, awarded Schiel the 5th Grade Cloud and Banner decoration and the 4 Star Wing medal, both among the highest of that nation’s awards. 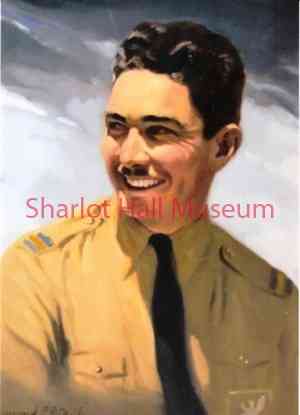 Sadly, the story of Prescott’s legendary WWII aviator ends on a tragic note. On the anniversary of Pearl Harbor, December 7th, 1942, Frank was flying a reconnaissance fighter plane back from a round trip to Japanese Formosa, 800 miles away. Flying through terrible weather and poor visibility, he slammed into a mountain north of Kunming. The crash site was located and Frank’s body recovered and identified on December 18th. He was buried in the AVG cemetery in Kunming on December 20th,

On October 10, 1947, the US Army vessel Honda Knot sailed under the Golden Gate Bridge into San Francisco Bay, completing the final leg of a journey for her military passengers. The 3,012 aboard were listed as “passengers (deceased)” for they were the remains of fallen servicemen returning home after WWII. Major Frank Schiel, Jr. was one of those passengers and the first of Prescott’s war dead to be brought home. An escort of 48 fighter planes flew over before dipping their wings in salute and banking away.

On October 20, 1947, Major Frank Schiel Jr. was laid to rest with full military honors in Mountain View Cemetery in Prescott.

A comprehensive exhibit curated by the author honoring the life of Major Frank Schiel, Jr.is currently on display in the Viewerie at the Prescott Public Library through the month of November.