Traveling Chautauquas lasting up to a week took place in Prescott into the 1920s and brought culture and educational experiences. They were a combination of lectures, dramas and musical presentations. 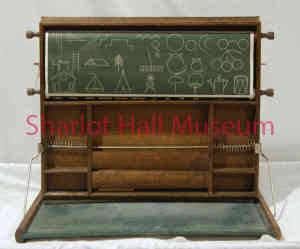 In July 1916 Frontier Days and Chautauqua Week kept the attention of Arizonans on Prescott. Frontier Days (featuring the rodeo) was held July 4-7; Chautauqua Week started on the 18th. The April 5, 1916 Weekly Journal Miner boasted that “July will be a banner month in the history of Prescott as the ‘Playground of Arizona’.”  It noted, “The striking difference between the two will furnish an attraction for both the fun-seeker and he or she who wants entertainment that is at the same time of educational benefit.”

An article in the June 7, 1916 Weekly Journal Miner suggested that people attending Frontier Days should ride to the event on a horse or pony and “wear the wildest and wooliest Western wearing apparel.” Headlining the annual four day event was the rodeo with eight competitions, including Pony Express and “free-for-all” ladies’ races.

In contrast, Chautauqua Week featured a circus for the children. Adults were treated to lectures as well as entertainment by the “Big Four”: Shildkret’s Hungarian Orchestra; a drama, The Melting Pot; Travin’s band and grand opera; and The Haydn Chorus. 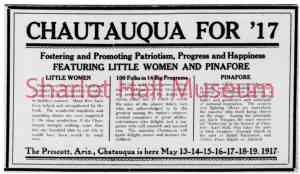 In 1917 Chautauqua Week was held May 13-17 at The Elks Opera House. An adult season ticket was $5; children under 12, $3.50. As the clouds of war hung over America, programming focused on loyalty to the United States and patriotism.

The first night’s keynote speaker was Temperance pioneer Lou Beauchamp. The “Humorous Philosopher” was known as the thinker who makes you laugh and the humorist who makes you think.

Beauchamp gave his famous lecture, “Take the Sunny Side.” The May 9, 1917 Weekly Journal Miner predicted “Word pictures reveal themselves before your eyes with startling clarity and you are enraptured with his eloquent description and the grandeur of his climaxes.”

The children’s programing expanded under the guidance of Miss Margaret Hotchkiss. She encouraged the local youth to participate in the Children’s Chautauqua Circus and to attend the performances of Little Women and Pinafore. 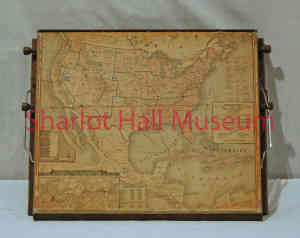 In addition to the CLSC, traveling venues and annual summer meetings at the Chautauqua Institution, the Chautauqua Industrial Art Desk currently featured in the Sharlot Hall Museum’s “Toys! It’s Not All Fun & Games” exhibit was produced and sold throughout the country.

The idea of a teaching desk was first introduced in 1886 to Bishop Vincent, who embraced the concept. The Chautauqua Industrial Art Desk soon became a fixture in many homes around the country with more than a million desks sold door-to-door by 1913.

In his lecture “That Boy,” which Vincent gave in 1892 during his visit to Prescott, he promoted the art of drawing by telling how he gave his son a blackboard on which he drew a locomotive. After visiting a real locomotive, his son’s second picture was better. “I concluded that if I had an appliance in my home that would teach children the power of observation, it was not a useless contrivance.”

The desk now in the Sharlot Hall Museum exhibit was owned by Dick Sprang, a comic book illustrator best known for his work on Batman. It opens into an L-shape like today’s laptop computer. The writing portion of the desk is a green chalkboard. A scroll with 26 teaching panels, however, is the highlight and the desk’s teaching center. Information from basic shapes for beginners to engineering and fine art for advanced learners is available. The Home Teacher, a book which accompanied the desk, described it as a “busy mother’s best friend.”