Modern day downtown Prescott bears only a vague resemblance to its early territorial self. While the Plaza is still there and the streets run in the same directions, most of the buildings we see date from the 20th century. Most are brick and constructed as a result of a devastating fire in 1900, that burned the buildings on the west and north sides of the Plaza. Most of the buildings were wood and were easily consumed by wind driven flames.

According to an article in the March 9, 1867 Arizona Miner, there was one brick building which was its office. The article continued, “As to the rest of the town, there are eight or nine stores in all; plain board shanties, with the exception of the building occupied by Messrs. Bowers, which is constructed of adobes, and is by far the best and most commodious building Prescott can boast of.” 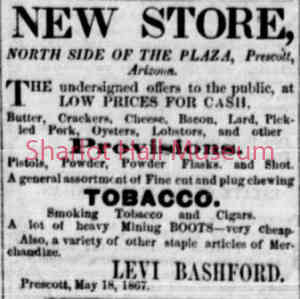 None of these businesses would endure past 1900. The one store on the Plaza that still has a presence has the name of Bashford connected with it. According to the Arizona Miner, published May 18, 1867, Levi Bashford had opened a store on the north side of the Plaza. This would prove to be a fixture in Prescott until the 1930s.

Levi Bashford had come to Arizona Territory as a member of the Governor’s Party and as the Surveyor-General. He purchased a number of lots after the town site was surveyed and was in a position to go into business. Using lumber purchased from the Quartz Mountain Saw Mill at $60 a thousand running feet, he constructed a modest one-story building on Gurley Street.

Bashford’s advertising shows that he was much like his competitors in that he offered a wide variety of goods “at low prices for cash.” In the way of food, he had “Butter, Crackers, Cheese, Bacon, Lard, Pickled Pork, Oysters, Lobstors [sic], and other Provisions.” Catering to his male clientele, he offered “Pistols, Powder, Powder Flasks. And Shot. A general assortment of Fine cut and plug chewing Tobacco. Smoking Tobacco and Cigars. A lot of heavy Mining Boots – very cheap.” 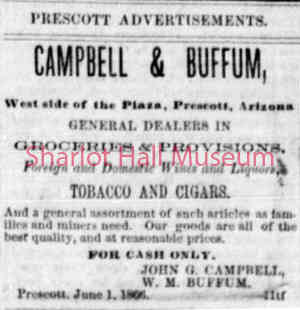 In the same issue of the Arizona Miner, his competitor, Wormser and Company ran an ad that said, “WORMSER & CO. Call the attention of the public to their new and large assortment of Goods, just received from San Francisco. They believe this stock to be the most complete ever brought to PRESCOTT. It consists of Clothing, Dry Goods, Boots and Shoes, Liquors, and a general assortment of the choicest Groceries, to be sold at the lowest rates for Cash.”

By March 1869, Bashford had started referring to his establishment as the New York Cheap store in advertising. It stated, “That the New York Cheap Store Is the Only Store in the Territory that Receives Goods Direct from New York. By this arrangement, the proprietor saves the enormous tariff usually levied by San Francisco merchants.” He may have been looking for a competitive edge as competition had grown.

Advertising in the same issue of the Arizona Miner were D. Henderson and Company, Kerr’s Cheap Store, and Allen and White in addition to the original competitors. In their effort to keep a portion of the local trade, Campbell and Buffum now advertised that they were in a “Fire-Proof” building. This was fire proof in theory only, as it did not survive the July 1900 fire in downtown Prescott.

As now, early Prescott was marked by businesses coming and going in the downtown area with some regularity. Campbell and Buffum had agreed to go into business for 10 years so they closed their business in early 1874. Each continued for a while as independent storeowners with some success. All of the others, with the exception of Bashford, left Prescott, either selling their store or closing it altogether.

“Days Past” is a collaborative project of the Sharlot Hall Museum and the Prescott Corral of Westerners International (www.prescottcorral.org). This and other Days Past articles are also available online at https://sharlothallmuseum.org/articles/days-past-articles.l. The public is encouraged to submit proposed articles and inquiries to dayspast@sharlohallmuseum.org . Contact SHM Library & Archives reference desk at 928-445-3122 ext. 2, or via email at archivesrequest@sharlothallmuseum.org for information or assistance with photo requests.