Within days of his inauguration as President of the United States in March 1933, Franklin D. Roosevelt ordered his secretaries of War, Interior, Agriculture and Labor to create a program that would improve conservation of the land and provide employment for as many as a quarter of a million men.  He named it the Civilian Conservation Corps (CCC).  During this time, the country was in the midst of the Great Depression with very high unemployment and poverty levels. 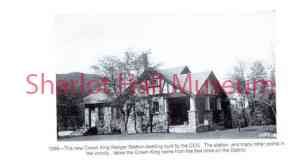 The eventual target population of the CCC was not older adult men, but young males from age 16 to 25 years of age.  These “boys” or “juniors” (the preferred term) were single, from families in poverty and with no work prospects. The pay was $30 per month with $25 sent home to their families required. They were supervised in the camps by the U.S. Army and by one of the many Departments of Agriculture for the actual work they performed. In the western states, the prevailing Departments were the National Forest, Bureau of Grazing and National Parks.  The Prescott National Forest had many projects waiting for the manpower to complete them.

In May of 1933, Prescott opened its first of nine CCC camps in Groom Creek with approximately 150 juniors and assorted Army personnel who organized and supervised the camp.  Also in place were local men who served as supervisors for the work details and experienced men who were skilled in specific tasks they taught the enrollees. Throughout the years of the camps’ existence in the Prescott area, the juniors came from Texas, New Mexico, Oklahoma, Arizona and, oddly, Pennsylvania.

Each of the nine major camps surrounding Prescott was created for the specific work that needed to be done.  Groom Creek and Lynx Creek camps were located in the ponderosa forest areas that were being severely damaged by the twig blight. The disease had been rampant in the Coconino, Tonto, Sitgreaves and Prescott National Forests since 1917 and was slowly destroying them.  Control was accomplished by climbing the tree, cutting off the affected branches and burning them. 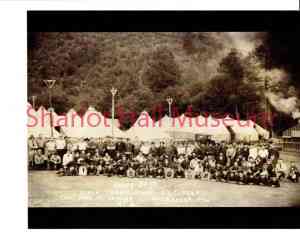 Most camps consisted of tents with wooden floors and wood or coal fired stoves.  During the winters, they were closed and the inhabitants moved to the camps at the Fairgrounds and Mayer, which were year-round camps. Smaller camps, or spike camps, were built near work sites for a limited number of juniors and staff.  In some of the spike camps, the project was completed in a few weeks, and they returned to their base camp.  Others required a year or more to complete.  Examples are the Mingus Mountain recreation facilities; Horsethief Basin campgrounds, lake and dam; and the Bradshaw Ranger Station and garage.  The creation of Granite Mountain Lake, dam, campgrounds and day recreation sites was undertaken by juniors who traveled daily from the Fairgrounds camp.  The Walnut Creek CCC camps had less glamorous but just as necessary jobs.  They worked mainly on ranches trying to control soil erosion and did prairie dog extermination, removal of water wasting juniper trees and building/repairing fences. Their work area extended from Camp Wood to Seligman.  In the later years of the CCC, the juniors of the Soil Conservation Service CCC camp developed more sophisticated methods of controlling erosion.

A great many tasks were completed by the CCC juniors during the eight years of their time in the Prescott area.  Even now, nearly 80 years later, we are indebted to them for the many wonderful recreation opportunities we enjoy.

This article is a preview of a presentation Judy Stoycheff will make at the Sharlot Hall Museum Education Center on November 14th at 2 PM. The presentation is open to the public free of charge on a limited-admission basis. Face coverings are required.