Among the numerous duties of this new agency was raising and stocking fish in states and territories, generally at no cost to the area where the fish were turned loose, since large railroad tank cars were used to move them.

In 1881, Arizona decided to regulate fishing in the territory. The Thirteenth Legislature, meeting in Prescott, enacted Number 66, “An Act To provide for the appointment of Commissioners of Fisheries for the Territory of Arizona,” into the Laws of 1881. It also stated that the Governor, with the approval of the Legislature, would appoint three commissioners to each serve three-year terms without compensation. The Legislature appropriated $500 to conduct commission business, which included stocking fish from the federal government as well as other states and territories.

The act also created the first Arizona fishing regulation, prohibiting the use of nets or seines for catching fish. This was punishable, upon conviction, by a fine of “…not less than twenty-five dollars ($25), nor more than fifty dollars ($50), and costs of prosecution.” Anyone not paying the fine was liable to spend not more than sixty days in jail.

One of the first commissioners was Secretary of the Territory John J. Gosper. The local newspaper, the Weekly Arizona Miner, noted on April 8,1881, that “Fish Commissioner Gosper and attendants left, well mounted…today, for Williamson Valley.” Since the act was signed into law on March 3, 1881, Gosper wasted little time in taking on the tasks of his new office.

Gosper apparently took his job seriously. An article in the Arizona Weekly Journal-Miner in 1890, referencing an earlier article, stated that it had “…represented Fish Commissioner J. J. Gosper in superintending the placing of a car-load of young shad in the Colorado river in the summer of 1883. The young fish were sent out direct from Washington and were placed in the river just above the old railroad bridge.” 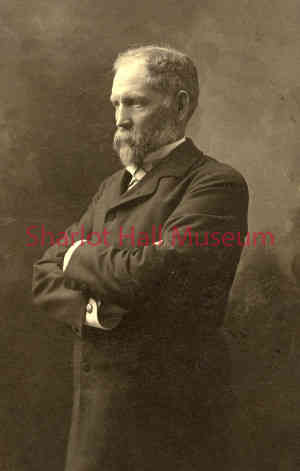 In 1890, Governor Lewis Wolfley appointed three new commissioners. Two Prescott men, Theodore W. Otis and John Howard, and a Phoenix resident, C. W. Stearns, were the new team. Otis was named secretary and Howard was chairman. In a notice in the December 10, 1890, Arizona Weekly Journal-Miner, Howard stated, “The U. S. Fish Commissioner at Washington having notified the commission that he will probably be prepared to furnish this territory at an early day with German carp, and perhaps other kinds of fish. This is to give notice to all persons that desire to raise fish and are now ready to receive them or spawn, to notify Hon. T. W. Otis, Prescott, the Secretary of this commission, the kind and quantity they desire, in order that we may be able to obtain them at an early day.”

Howard, who also happened to be mayor of Prescott and never one to turn down an opportunity to make a joke, had been quoted in an earlier edition of the newspaper regarding his new duties. “Judge Howard, of the territorial fish commission, says that his commission is now prepared to furnish anything in the fish line from a whale to a tadpole, the latter however are the most numerous this season of the year, while in the game line they will take orders from an elephant down to a chip-munk [sic].”