At one time, Arizona’s rivers and streams teemed with native fish species. Many of them were exotic-looking to immigrant eyes, such as the bonytail chub, while others like the Apache trout had a more familiar look. The first mention of fish in Arizona rivers came from James Ohio Pattie’s book The Personal Narrative of James O. Pattie of Kentucky. Pattie wrote about finding fish in the Gila River when he was on a beaver trapping expedition in 1825. At one place his party stopped, they caught fish and cooked them in an adjacent hot spring.

Obviously, fish were known to Arizona’s native tribes; however, not all of them ate fish. The Yavapai, as well as the Western Apache, were natives who did not eat fish. Neither did the Navajo, Hopi or Zuni due to religious beliefs. However, tribes along the Colorado River both fished and ate fish. 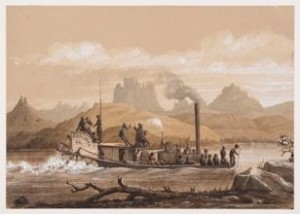 When the war with Mexico ended, the boundary between that nation and the United States remained unsettled. The two countries agreed to a survey that would define their mutual border, including lands in today’s southern Arizona.

John Russell Bartlett headed the American arm of this joint effort that began in 1851. He noted that his assistant, John H. Clark, took with him what he believed to be several new species of fish from the San Pedro River. Bartlett’s military escort commander, Colonel James Graham, wrote that they took numerous fish from Babacomari Creek, some of which he thought might be new species. 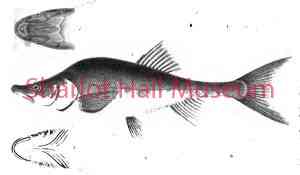 On his return trip to the East, Bartlett commented on fish taken from the Gila River. “A number of fish were brought in today by the Mexicans resembling the buffalo-fish of the Mississippi. They drove them into a small nook in a laguna nearby, and then rushed into the water and killed them with poles. I ate of them at dinner, but found them soft and unpalatable.”

The military was not alone in noticing fish in Arizona rivers. According to Andrew B. Gray, surveying for a private company in the southern part of the territory in 1854, there were “large fish” in the San Pedro River. He described it as a “living stream” of about eight feet in width with some mesquite and cottonwood trees along its banks.

Not all fish were confined to streams. Lieutenant Edward Fitzgerald Beale commented on this in his report Wagon Route From Fort Defiance to the Colorado River. They had stopped at Jacob’s Well, a hole in the middle of a plain with water at the bottom. Beale described it as “…the most wonderful place of its kind….The water is agreeable to the taste, though a little brackish, and in it are quite a number of fish.”

Not all streams had fish, as was reported by Amiel Weeks Whipple in his railroad survey report, and even some places that should have had fish had very few. Joseph C. Ives wrote about his exploration of the Colorado River in 1858 “Every form of vitality is rare…of fish, but a single one - and that a poor variety – has been caught, and game is seldom met with.”

In the next installment, we will see what Arizona pioneers had to say on the subject.