Native American baskets are woven with more than willow and sumac- they are also woven with the tribal beliefs of the weaver.

Baskets were used by most early inhabitants of North America, with the oldest basket found in the Southwest dating to about 8,000 years ago. Ancestral 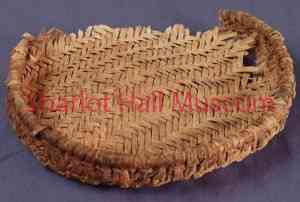 They were used for a variety of daily tasks. For instance, burden baskets provided a way to carry items - food, wood, personal belongings. Coiled tray baskets were used to serve food, while others were so tightly woven, they could hold water. More loosely woven baskets were used as sifters. Early baskets were important in various ceremonies and also in trading. The native materials used to create baskets varied by region, and family often helped gather those plants. Natural dyes provided a variety of colors.

The traditional style of making these baskets has passed from one generation to the next with few changes. Yucca, rabbit brush and sumac are still used by Hopi weavers. Their baskets are wicker, coiled or plaited, with red, yellow and black the traditional colors. Each color and woven pattern depicts aspects of Hopi life, both present and past. According to the website for Bischoff’s Gallery, the Hopi feel “just as the basket’s fibers are woven together, so are other parts of Hopi life; none is unrelated to another.” 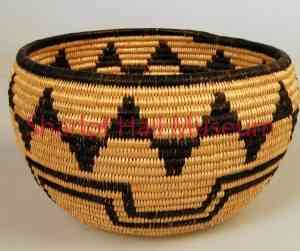 Navajo baskets, often coiled, are created from sumac, yucca or willow. The colors red, black and white are customarily used - the sun being represented by red, the clouds by black, and white depicting the sacred mountains. Although designs may have slight variations, each basket embodies Navajo beliefs and values. For instance, the designs found in a coiled Wedding Basket (synonymous with a ceremonial basket) represent the stages of life. The baskets are filled with corn meal mush that is shared at a Navajo wedding.  For the wedding ceremony, the basket may also be inverted and used as a drum.

The Yavapai people were known as master basket weavers. Yavapai baskets are found in the Smithsonian Museum in Washington, D.C. and locally at the Sharlot Hall Museum. Traditionally, their baskets displayed the six-pointed Yavapai star and included symbols of the sun, animals and man. Dr. Mark Sublette, a Native American art expert, states that the Yavapai baskets are often symmetrical, contain many figures and are darker. The darker color is from the very durable devil’s claw plant. Also used are red yucca root and willow. 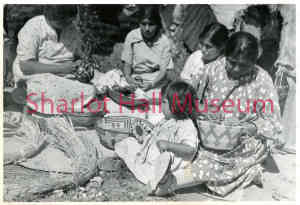 Basket weaving demonstrations will be part of Sharlot Hall Museum’s 24th Prescott Indian Art Market this year on September 17-18th at the museum. Featured will be two weavers from Hotevilla on the Hopi Reservation who will be demonstrating their craft.  Jessica Lomatewama learned to weave baskets from her husband’s aunt; 40 years later she continues this craft. Hopi weaver Leora Kayquoptewa acquired her weaving techniques from her mother and has shared them with her daughter.

In the Sharlot Hall Building at the museum there is a permanent exhibit of Yavapai baskets entitled “The Baskets Keep Talking” which explains the history and culture of the tribe.