Mary Page Kendrick traveled many miles during her life to get to Middleton, Arizona Territory. Born in Louth, England in 1854, she was the eldest of ten children. As an adult she moved to New Zealand to teach English. There she met and married an American, Fredrick P. Kendrick, on New Year’s Day, 1880. Born in New York, Fred was a ship carpenter who worked in the Far East, South America and the South Seas. After having three children in New Zealand, the Kendricks moved to Massachusetts in 1884. During their eleven years there, four more children were born. Two more were added to the family after coming to Arizona in 1895.

Mary resided in Middleton some time after 1900 and by 1905. The 1900 U.S. Census has her owning a home and living with six of her children in Flagstaff.  Her eldest son, Lionel, was working in Jerome. Fred was not listed with the family on the 1900 census, but appeared in the 1902 Yavapai County Voter Register with a Middleton address. A mechanical engineer, he assisted in the construction of some of Arizona’s earliest mining mills and smelters, working in Kingman, Jerome, Humbolt and McCabe, as well as for the De Soto Mining Company. Middleton was located on the Crown King branch of the Bradshaw Mountain Railway between Mayer and Crown King near Cleator.

Many of the 75 people living there and the 100 workers camping at the De Soto Mine in 1905 depended on the Bradshaw Mountain Railroad to bring much of their food and supplies from Prescott. Mary, who lived with Fred and their childern in Middleton during the De Soto Mine heyday when it was producing tons of copper ore (1904-1907), used the “internet” of her day to order goods from the Bashford-Burmister Company (B-B) in Prescott.

For example on August 31, 1905, she mailed a penny postal card to the B-B requesting 25 pounds of onions and a half case of lemons. The postal card was taken by train from Middleton to Prescott. After B-B received the card, a clerk filled her order and sent the produce to Middleton on a return train. The transaction was done on credit, and the Kendricks settled their account with the B-B at a later time.

The “Middelton” postmark on the postal card was not a spelling mistake. The railroad and post office both came to the village in 1903. The railroad, named for George W. Middleton (owner of the De Soto Mine) was functioning as early as January with supply trains serving the site. However, when the sign for the train depot was installed, it read “Middelton”. Perhaps this influenced the spelling of the name of the post office established on May 8, 1903. 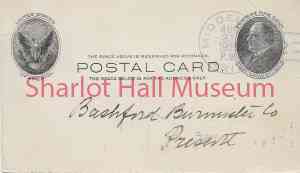 Likely the biggest event for the family while living there was the double wedding of  daughters Catherine and Faith on June 27, 1906. Catherine married Allen B. Kelly and Faith wed Charles Carmen. Rev. Father Bennett from Prescott performed the morning ceremony which was followed by a short reception and wedding breakfast, and then meeting the afternoon train to Prescott. The honeymooners visited the Grand Canyon as well as Southern California. The Weekly Journal-Miner announcement on July 4, 1906 noted that both men held positions of responsibility at the De Soto Mining Company and the two couples would be returning to Middleton to live.

In 1907 the Kendricks left Middleton for Glendale where, according to the 1910 U.S. Census, they had a general farm. Mary and eldest son Lionel were listed as farmers and Fred as a carpenter.

Fred passed away in 1937 and Mary in 1941. Both were cremated, their ashes interred at the Greenwood Memorial Lawn Park in Phoenix.