The title is only one of John Hance’s outlandish claims made to fellow travelers and visitors to the Grand Canyon from the late 1800s to 1919. He and his brother George arrived in the new town of Prescott in the Arizona Territory in December, 1868 and purchased land to farm along Granite Creek. The following year, John sold his share of the farm and homesteaded Orme Ranch, living on his earnings as a teamster. While hauling wood and hay for Fort Whipple and Camp Verde, he often entertained his fellow teamsters and travelers with tall tales of the old west. When the military business dropped off, he went bankrupt. 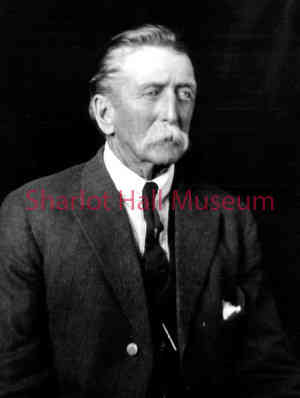 In 1883 he moved to the Grand Canyon hoping to become a successful miner. He built a cabin there, becoming the Canyon’s first European-American settler. He soon found that guiding visitors down the Canyon was more profitable than any of his mining ventures. In 1884 he opened the first tourist camp on the rim and constructed the first trail down the Canyon to allow his tourists to get to the Colorado River. The trail was called the Hance Trail.

While taking his tourists on mule trains down the trail, he regularly entertained them with outlandish stories of “old Arizona and the Canyon.” Using the honorary title of Captain, he enthralled his visitors with humorous tales, masterfully intermixing fact with fiction. In one of his best-known tales, John claimed that while riding his horse Darby, he was surrounded by groups of hostile Indians. His only chance to escape was to jump the Grand Canyon. Having no choice, he galloped at full speed over the edge. About half-way across, Capt. Hance looked down at the beautiful Canyon floor and, unfortunately, Darby did too. Soon they began to plunge rapidly towards the Canyon floor. Knowing that Darby was a cutting horse and could turn on a dime, he pulled hard on the reins and yelled “Whoa Darby, whoa!”, hoping to slow their rapid descent. Amazingly “the horse put on the skids and pulled up just short of two feet from the canyon floor and they glided safely to the floor.”

In 1903 he told President Theodore Roosevelt many of his stories while guiding him down the Hance Trail by mule train to the Colorado River. Afterward, the President complemented his storytelling, saying that Capt. Hance “was the best liar he had ever encountered.”

John Hance died on January 6, 1919, in Flagstaff and was buried on the South Rim of the Grand Canyon. On January 10, 1919, The Coconino Sun, a Flagstaff newspaper, echoed the liar sentiment. They wrote in his obituary that Captain Hance spent the past 20 years “acting as a guide part of the time and as entertainer for tourists… Captain Hance had a lively imagination and a special aptitude for telling droll stories of the early days.”