The remarkable Isabella Greenway King was born in Kentucky in 1886 into a family of wealth, fame and social standing. The family lived briefly in North Dakota, where they were neighbors to future President Theodore Roosevelt. In 1901, she and her mother Martha moved to New York City so Isabella could attend Spence School and Miss Chapin’s School, private schools for upper class young ladies. At Chapin’s School she became friends with Eleanor Roosevelt, and in 1905, was a bridesmaid in Eleanor’s wedding to future President Franklin Delano Roosevelt (FDR).
That same year, Isabella married Robert Munro-Ferguson, a Scottish immigrant from a wealthy family who fought with the Rough Riders in the 1898 Spanish American War. Robert and Isabella had two children, Martha and Robert Jr. Three years after marrying, Robert developed tuberculosis, so the couple moved to New Mexico’s drier climate in 1910. He later died of TB in 1922.
In 1922, Isabella then married a friend of Robert’s, Gen. John Greenway, who also served in the Rough Riders. Together they had one child, John Selmes (Jack) Greenway. The family moved to Ajo, Arizona where they managed the New Cornelia copper mine.

After John passed away in 1926, Isabella moved to Williams, Arizona and bought the Quarter Circle Double X Ranch, which remained in family hands until 1977, and Gilpin Airlines in LA.
Concern for WWI veterans prompted Isabella to relocate to Tucson and establish the Arizona Hut to provide jobs for veterans manufacturing and selling furniture. In 1934, she supervised the construction of the Arizona Inn which she owned, an elegant hotel in Tucson visited by celebrities including Cary Grant, Clark Gable, Bette Davis, Bing Crosby, John Wayne, Frank Sinatra and Katherine Hepburn. The Arizona Inn still entertains visitors today. 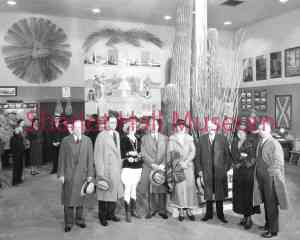 As a tribute to her late husband John Greenway, Arizona Democratic Party leaders elected Isabella as a national committeewoman in 1928, launching her political career.  In 1932, she campaigned for her friend FDR for President, and at the Democratic National Convention in Chicago, Isabella seconded FDR’s nomination as the party’s candidate. While in route to her Williams ranch in late September for some pre-election rest, FDR stopped in Prescott to meet a large crowd of well-wishers. After dark, he emerged from the train and told the crowd of 3000 he would not make a political speech because it was Sunday! Instead, his remarks dealt with cattle raising, mining and agriculture in Arizona.

In 1933, Isabella ran for Arizona’s At-Large seat in the US Congress with the support of FDR and Eleanor. Elected with 73% of the popular vote, she supported increases in veterans’ benefits and the implementation of a copper tariff to help Arizona’s mining businesses. Despite her friendship with the Roosevelts, she opposed proposed reductions in veterans’ pensions to finance FDR’s New Deal economic recovery programs. In 1936, after two terms, Isabella retired from the House of Representatives for family reasons and returned home to Tucson.

During WWII, she led the American Women’s Volunteer Service which provided civil defense training to women in the US. She married Harry O. King in 1939 and made her home in New York City, returning to Tucson for visits with family. After suffering several heart attacks, Isabella Greenway passed away in 1953 at age 67 at her home in Tucson. She is interred at the family cemetery in Kentucky.

Isabella Greenway was a woman of many talents. As a businesswoman, she managed a ranch, operated a regional airline and owned/supervised a tourist hotel. She cared for and looked after military veterans, and she served as Arizona’s first Congresswoman. As recognition for her contributions to Arizona history, Isabella was inducted into the Arizona Women’s Hall of Fame in Phoenix in 1981.