An early proprietor, H. (Henry) C. Vincent, and his family experienced the full circle of life at the hotel. Moving back to Prescott from Williams, he took over the Congress House on October 10, 1901.

Early ads boasted “Everything Strictly First-Class.” However, the January 29, 1902 Arizona Weekly Journal-Miner announced the hotel would soon be remodeled, adding ten rooms and other improvements. During the renovation, Vincent changed the name from Congress House to Hotel Congress. 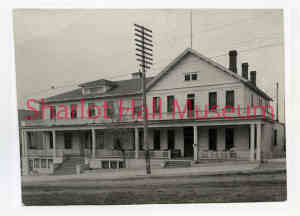 Nearly a year after extensive renovations began, the Vincents celebrated the opening of the new dining room with an elaborate turkey dinner. The January 21, 1903 Arizona Weekly Journal-Miner stated, “In addition to the new dining room the Congress has been renovated, repapered and painted and new brass bedsteads have been placed in the bedrooms and the provisions for the comfort of the guests are complete.”

Later that year, H.C. and wife Elizabeth welcomed son Robert H. Vincent. The July 8, 1903 Weekly Arizona Journal-Miner reported that guests received an extra piece of pie and joy seemed to pervade the place. “The new ‘boarder’ has already won the hearts of all the boarders and the house is full of tin whistles, rubber balls, rattle boxes, etc.” 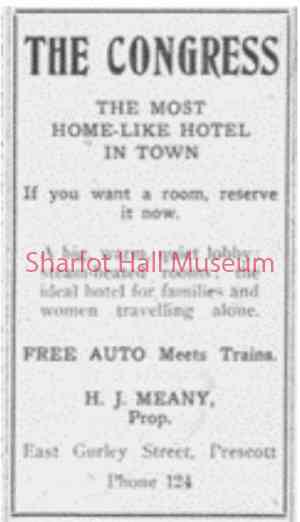 The site of many weddings, the hotel hosted a special one in 1907 when Mrs. Vincent’s son, Alva A. Smith, married Miss Linnie Roberts. Approximately fifty people attended one of the most brilliant Prescott weddings in months, according to the October 16, 1907 Weekly Arizona Journal-Miner.

Two years later, the family’s fortunes abruptly changed. Elizabeth died from heart issues on February 12, 1909, during a dance at the hotel. It was also the site of her funeral two days later. She was buried in the Odd Fellows Cemetery on her fiftieth birthday.

In August Elizabeth’s son Alva Smith sued H. C. for a share of his mother’s estate and won. On October 1, H.C. gave up his business interests in the hotel, married Ada J. Ehret from California three days later and settled on a Miller Valley farm where they lived and worked for nearly a decade. 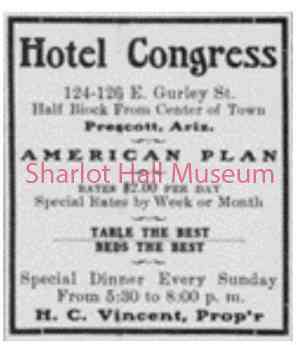 From his tenure at Castle Hot Springs, Meany knew what people wanted. In 1912 he added a golf course and with the advent of automobiles, improved the 26-mile private road to the resort.

Meany became proprietor of the Hotel Congress on December 15, 1917, when he leased it from the Prescott Realty Company. He changed the name to the Congress Hotel and made improvements, including steam heat and suites, new rugs, furniture and fixtures. He served his guests with amenities like providing an automobile to meet their train.

He ran the hotel for five years until Murphy’s estate leased it to Mrs. Lola A. Burgess from El Paso, Texas in 1922. The December 6, 1922 Weekly Journal-Miner announced that H.J., wife Alice and daughter May Alice were moving from the hotel to the Murphy apartments in Prescott which they had recently leased. Mrs. Burgess only managed the hotel for seven months until it burned in July 1923, not to be rebuilt.