In 1952 George bought his own house on nine acres on Meadowridge Road, moving his log studio to the site. It would serve as his studio for seven years during which his artistic production, reputation and fame grew. Son Darrell Phippen, born in 1954, noted “the huge change in dad. His art work blossomed.” George was now illustrating for major magazine publishers, producing covers and story illustrations for True West and Frontier Times, among others. 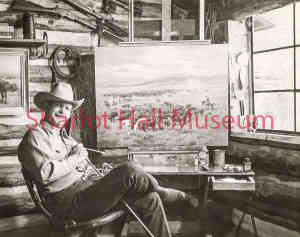 The family uprooted once again in March of 1959, seeking more subject matter with a move to Grand Junction, Colorado. George had become interested in bronze art and in reviving interest in the lost wax casting process for bronze sculptures. But Colorado proved a disappointment, and March of 1961 saw a return to the Prescott area and the purchase of an eleven-acre property in Skull Valley—his fabled Lone Burro Ranch.

“Dad needed more privacy than Prescott afforded,” eldest son, Loren, remembered. “People were constantly interrupting his work. Plus he was beginning to work with bronzes and needed more space for his Bear Paw Bronze Work business that he had just established.”

Hoping to promote Western art, in June of 1965 George, along with three fellow artists, founded and served as first president of the Cowboy Artists of America. But he would not live out his term.

Son Lynn, born in 1950, vividly remembers “the night dad first got sick” with abdominal pain in July of 1965. Doctors confirmed the onset of cancer. Soon, holding a paint brush became troublesome, although he could still sculpt, “often sitting on the side of his bed,” Lynn recalls.

On April 13, 1966, the creator of over 300 oil paintings, scores of drawings and more than a dozen bronze sculptures died of liver cancer, ending a remarkably productive twenty-year career.

But the cabin/studio survived the decades, tucked behind a little rise on the original Meadowridge homestead. Phippen fans knew of its existence, particularly Edd Kellerman, executive director of the museum that bears Phippen’s name. So when Kay (Odgers) McLaughlin, whose family has owned the Phippen property since shortly after George vacated it, called Kellerman in July of 2020 with an offer to donate the cabin/studio, a decades-long dream materialized to make the building part of the Phippen Museum campus.

Garrett Denny, owner of Vibrant Buildings Solutions, offered to raise the building and front porch slab off its foundation and move it by flatbed to the Phippen Museum property, where it now rests on a new foundation poured by SunState Builders owner Jim Chamberlain. 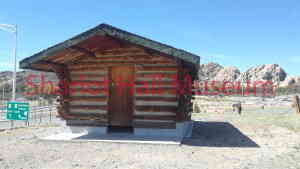 “A one in a million chance that it survived,” notes Kellerman, who has plans to restore the cabin/studio to its original condition, including the now-absent skylight. Other than a slightly damaged roof, the studio stands intact with solid walls and clean interior.

Touches of the famed artist remain clearly visible. The front cement slab bears George Phippen’s professional logo above a 1953 date, along with Lynn’s childhood hand and footprint and two horseshoes. The inside walls display favored hand-written sayings, including the clearly visible, “Best way to get rid of an enemy is to make a friend of him,” a motto George lived by.

Thus with that wisp of imagination, George Phippen welcomes you to his studio. Two hundred yards due west—fittingly—his last bronze, a fourteen-foot-tall rendition of “Cowboy in a Storm,” uncompleted at his death, centers the recently built traffic roundabout fronting the Phippen Museum. Bookends, in a sense, commemorating the remarkable career of the most famed cowboy artist of his generation.