Life on the frontier was hard, both physically and emotionally, and survival often depended on new settlers learning to forage off the land by hunting, fishing and gathering berries, nuts and edible bulbs. The harsh reality of feeding a family, especially during the long winter months, was a constant concern. Homesteaders and ranchers were frequently isolated and had to be largely self-sufficient, especially until the seeds they brought west with them became gardens and crops, or if they had lost their milk cow on the journey or had not brought chickens with them. 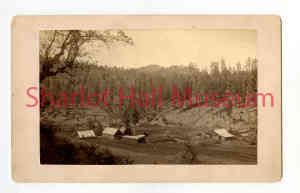 Anything with feathers, fur or fins was fair game and was hunted and eaten. Deer, elk, buffalo, wild turkey, geese, rabbits and ducks were the most frequently hunted, although squirrels and raccoons were too. A variety of these meats, as well as beef and pork eventually, were preserved by smoking, curing or jerking.

Even water could be difficult to come by. Carrying it to the cabin, garden and animals was never-ending, backbreaking work. Keeping a fire going was also difficult, along with collecting eggs, milking the cow, churning butter, baking bread, mucking the stalls, planting, harvesting, canning, butchering and on and on.

Because farming and ranching were physically demanding, a variety of carbohydrates were eaten to maintain energy. Typical frontier diets included potatoes, beans, rice, hardtack, soda biscuits, cornbread and cornmeal mush. Soups and stews were another favorite; a soup might contain all the “clean ends of game” like heads, tails, wings and large bones.

Settlers were creative and inventive with the lack of supplies or money to buy goods. Dried fruits were made into pies, cobblers and puddings, raisins were added to desserts like “spotted pup” which used left-over rice, and fruit jellies and applesauce were used to sweeten breads and hardtack. Sugar was typically in short supply, so molasses or honey was used instead and vinegar was often a substitute for lemons. Boiled, mashed beans flavored with nutmeg and allspice made a lovely ersatz pumpkin pie. 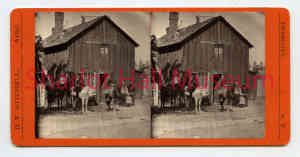 When Lincoln created Thanksgiving as a national holiday in 1863, the typical “back East” Thanksgiving table was stuffed with far more than turkey.  Multiple meats were the norm and many Thanksgiving dinners included oysters, fish, roasted wild ducks, stewed quails, macaroni,  and chicken pot pie.

On the frontier, cowboys ate mincemeat, which eventually became a staple for Christmas dinner. Here is a Western “old timer’s” recipe for mincemeat:

Boil the neck meat of a cow, deer or elk until tender; grind the meat. Cook with a cup of vinegar for three hours. Add cooked apples, raisins, some allspice, cinnamon, cloves, molasses and black pepper. Heat thoroughly. If you want a little kick, add some brandy or whiskey.

Gradually, as Thanksgiving evolved and settlers “out West” added their own regional preferences to the menu, the wild turkey, a uniquely North American bird, became the favored meat choice for the holiday.

An 1888 recipe for stuffing included: very finely grated stale bread, grated rind of a lemon, a little onion, finely minced, minced parsley and thyme, an unbeaten egg, half a cup of butter and hot water or milk.

By 1870, Prescott had its unique version of pumpkin pie. Here is a recipe for Prescott Pumpkin Pie “fit for a king” published in the Weekly Arizona Miner on April 16th, 1870.

Stew and strain the pumpkin or squash as usual, add boiling milk till it is about one-third thicker than the ordinary preparation, then thin and sweeten with equal quantity of molasses, and bake one hour in a hot oven. Those who have always made pumpkin pies with eggs, will be surprised to find how good this is without any.

As Mark Twain said, “Thanksgiving Day. Let all give humble, hearty, and sincere thanks now, all but the turkeys!”