From a Hut to an Emporium - The Bashford-Burmister Company: Part 2

The Great Fire of July 14, 1900 destroyed B-B Co.’s three-story brick store on Gurley Street and nearby warehouses, as well as stock and fixtures. The warehouses on the Hill and Gooseflat were saved, according to a telegram Fredericks sent to Weeks (who was in Chicago). During early stages of the fire, Secretary Aitken entered the store, opened the safe and saved the cash and books. He reported he had sufficient records of B-B’s accounts to continue business. 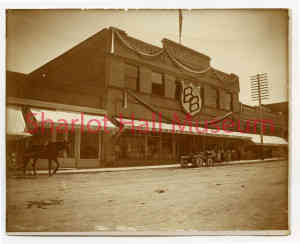 The company’s board met at 4:30 A.M. on July 15, the morning after the fire, at R. N. Frederick’s home on N. Montezuma Street. According to the minutes, Fredericks reported on the company’s losses “and that prompt action must be taken to secure a new stock and resume business at once, in order to maintain prestige of the trade.”

Most of Prescott’s businesses were lost, but nothing like the losses sustained by the B-B Co. which totaled $250,000 ($7.1 million in 2020 dollars). According to the July 19, 1900 Arizona Weekly Journal Miner, total losses for Prescott businesses were $1 million ($28 million in 2020 dollars). The only businesses saved were Goldwater Brothers, T.M. Otis, A. Blumberg, J.I. Gardner, Brown Brothers and Joseph Dougherty.

Bars were doing business on the Plaza almost before the fire was out.  As soon as they could resupply, storekeepers also set up their shops on the Plaza.

The B-B Co. reopened for business on Monday the 17th, three days after the fire, at its warehouse in the Leuke Hall Building on the corner of Willis and Marina. B-B’s board of directors decided to focus on retail groceries and a full line of staple goods to meet the wholesale trading in mining and milling supplies. Although they were competitors, J. I Gardner and the Goldwater Brothers offered to sell goods to B-B Co. at cost in order to help them restock and reopen quickly. 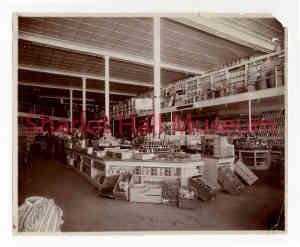 Five weeks after the fire, a B-B Co. ad in the August 21, 1900 Arizona Republic stated they were “Just a Little Scorched by the big fire: that’s all.” The ad went on to say all their merchandise was new and they were prepared to fill orders for groceries, animal feed and mining supplies.

Rebuilding almost immediately, B-B Co.’s new store opened in January 1901. The new building measured 75’ x 125’ with 30,515 square feet comprising the main floor. Indeed, it was an emporium and the largest mercantile in the Territory. The January 30, 1901 Arizona Weekly Journal Miner called it a magnificent new store, saying it was “the largest and finest store building ever erected in Arizona.”

The company took the opportunity to install several modern features. The interior included modern tin ceilings, an elevator and 230 globe electric lights. The building front had large display windows. A special attribute of the glass front was a section prism reflecting glass that concentrated the light and reflected it into the building, making it brighter inside than with ordinary glass. There were no cash registers. A Lansom System was used to send cash from the clerk to a cashier and back. Early systems used a small basket that ran on a wire; later models were pneumatic. 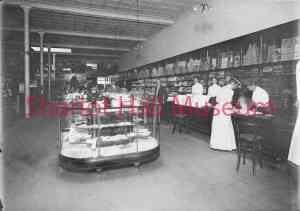 The new store had many departments, Grocery being one of the largest. The Millinery department carried ready-to-wear clothing, notions, fabric and patterns. Women could also shop for crockery and china.

With a magnificent new building and an extensive inventory, the B-B Co. was ready to make an impact not only in Arizona but throughout the Southwest.

Part three addresses some of the company’s customers living in Yavapai County.