Fiorello Enrico LaGuardia was born in the Bronx on December 11, 1882. As a child, his middle name was changed to Henry, the English form of Enrico. Fiorello, affectionately known as “Little Flower” (“Fiore” in Italian means “flower”) moved with his family to Fort Huachuca, Arizona in 1890. In 1892 they moved to Fort Whipple in Prescott. His father, Achille, was the U.S. Army bandmaster at both forts. Fiorello attended Prescott’s public elementary and high schools and played cornet in his father’s orchestra. For health reasons, his father was discharged in 1898. The family then moved to his mother's hometown of Trieste, Italy. Fiorello often expressed fond memories of growing up in Prescott. His upbringing here ultimately led to naming the bridge over Granite Creek on North Montezuma Street after him. 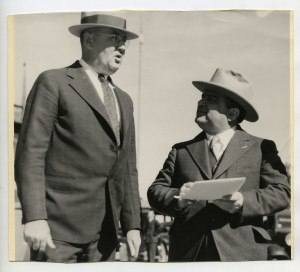 Fiorello returned to New York City in 1906 and attended New York University to become a lawyer. At 5 feet 2 inches, he would nevertheless become a “political giant” representing the state of New York and New York City. His political career began in 1916 when he was elected New York’s representative to the U.S. House of Representatives. His term ran from 1917 to 1919, but he took leave in 1917 to join the Army. During World War I, he commanded a U.S. Army Air Service unit along the Italian/Austrian border and was promoted to Major. In 1919 he married Thea Almerigotti. Unfortunately, she died in 1921 from tuberculosis at the age of 26. LaGuardia was re-elected to Congress from 1922 to 1933. In 1929 he married Marie Fisher. He later became a three-term mayor of New York City from 1934 to 1945.

After a 37-year absence, Fiorello visited Prescott with his wife in April 1935. Landing in Winslow on April 17, they spent several days resting and sightseeing at the Grand Canyon. They planned to fly to Prescott from Winslow, but early on April 20 a caravan of vehicles led by Prescott Mayor Charles F. Robb (Fiorello’s former schoolmate) departed for the Grand Canyon to pick up the LaGuardias. The welcoming party included Grace M. Sparkes, Prescott Chamber of Commerce Secretary. Returning through scenic Oak Creek Canyon and the Granite Dells, they arrived in Prescott the same day. 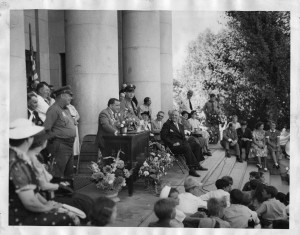 The headline “LaGuardia Arrives for Prescott Visit” in the April 20, 1935, Prescott Evening Courier and the accompanying story detailed their plans during the visit. They included seeing a movie, attending Easter service at St. Luke’s Episcopal Church, dining at The Palace Saloon, visiting Fort Whipple (then Whipple VA Hospital) and meeting former schoolmates. On April 22 he and his wife were driven back to Winslow to return to New York City by plane. 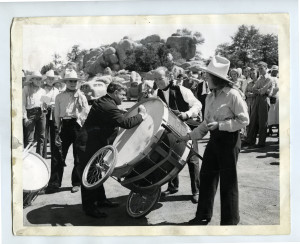 On September 14, 1938, the LaGuardias returned to Prescott. This time they landed in Phoenix and were driven to Prescott by former Mayor Robb and Miss Sparkes. A parade group consisting of dignitaries, the Prescott High School band, the Fire Department, ex-servicemen and school children met them at the south end of Prescott. The parade proceeded up Montezuma Street and ended at the north side of the courthouse for a welcoming ceremony. Fiorello gave a public address on the north steps of the courthouse. During this visit, he attended a breakfast with former classmates, spoke at St. Joseph’s Academy and visited the Whipple VA Cemetery. The highlight of the visit was the dedication of the highest point in the Granite Dells, named for his father, Achille. Although he promised to return in 1939 to participate in the dedication of a new high school project (now Mile High Middle School), Fiorello and his wife never returned.