Ernest A. Love Airport was dedicated in 1928 and, up to the beginning of the 40’s, had limited local and transient use. With war looming, Congress set to improving air connections and selecting inland airports for pilot training. During the war, Love was used to train Navy Air Cadets. Once the war was over, civil aviation increased dramatically, and the Federal Airport Act of 1946 provided matching funds for improvements at existing airports. 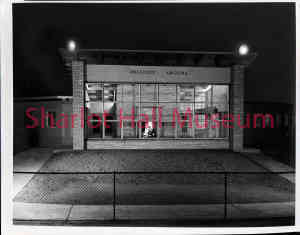 Once airline service began in 1947, the City of Prescott recognized the need for airport improvements and, in 1948, received funds for an administration building and terminal and for other facility updates. Named in memory of Ernest A. Love, a portion of the city’s matching funds for the terminal came from his mother’s estate (see plaque on the south end of the fireplace).

The building was designed as a rectangular body with two wings. The body houses the lounge with a fireplace, the bathrooms and a veranda. It faces the point where the runways cross. The wings, one containing the restaurant and the other originally housing administration offices, parallel the runways.

The building is mostly concrete block with a wood roof with exposed beams. Stone columns support the shed roof on the runway side of the lounge. A large curtain wall of Thermopane windows faces the runways and the distant Black Hills. Thermopane was a pioneering dual pane window with air sealed between the panes to serve as insulation and to reduce sound. Patented in 1941, it was promoted as appropriate for solar houses, but its use in the Prescott terminal preceded its growing popularity in the early 50’s. This expanse of glass, about 30 feet wide by 10 feet tall with narrow wooden mullions, foreshadows on a small scale some aspects of airport architecture 20 years in the future. On the other hand, the stone columns on either side of the windows, the stone fireplace and the exposed beams of the roof also suggest a look back to the Craftsman style.

The dedication plaque on the right end of the fireplace lists Airport Manager Grant MacCurdy, City Engineer C[ecil] C. Overstreet, Consulting Engineer A[lfred] S. Fuller, who signed the architectural drawings, and Builder Mark Cockrill Construction Co. of Phoenix. Although a talk given by MacCurdy prior to construction indicated the fireplace would be decorated with Arizona cattle brands, that does not seem to have happened.

Enlargement of the terminal building occurred in 1957, when a dining room was added to the restaurant, a covered area was added outside the lounge and the walkway to planes was covered. Additional modifications and additions to the building have occurred over the years. As part of the great expansion of American airports in late 1940’s, the Love Terminal is the oldest active one in Arizona. The Winslow terminal was built in 1926 and the old Tucson terminal in 1948, but neither are still used for their original function. The only older terminal in the Southwest still in use is at Santa Fe, N. M. The Love Terminal is considered eligible for the National Register of Historic Places.

Construction of a new airport terminal is forthcoming. The old terminal will remain, but its specific use has not been decided.