Cleator - The Town and the Family 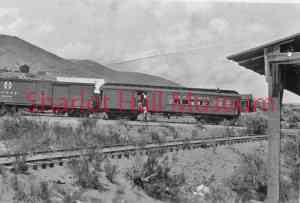 The Turkey Creek Mining District was established in 1864. The town, near a placer gold mining site and known as Turkey, included mining camps and a stagecoach station two miles west of Turkey Creek.

Construction began in 1895 on a railroad to connect mining towns and bring ore to smelters. Called “Murphy's Impossible Railroad” because Frank Murphy was determined to build it despite switchbacks, high trestles and a tunnel needed to get from Mayer to Crown King, it was completed in 1904.

Born on the Isle of Man in 1871 and arriving in America in 1889, James Patrick Cleator came to prospect in the Bradshaw Mountains in 1900. 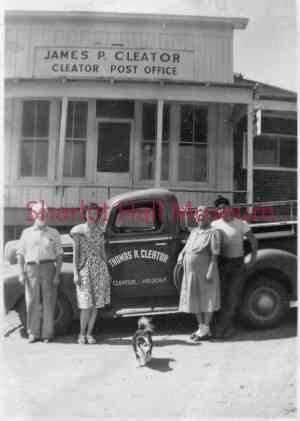 In 1905 Cleator visited Leverett "Lev" Pierce Nellis, who had a country store and saloon in Turkey. James bought half interest in the store and saloon and partnered on a cattle ranch. In 1915 they split the business; James took possession of the town in exchange for cattle and $2500. He married Wilmetta Pearl Hunt in 1919 and they had two children, Betty and Tom.

The town was renamed Cleator in 1925 with James as postmaster. In 1927 the railroad tracks were torn up as mining was declining and the population had dropped to 60. By 1949 James put the town up for sale, but there were no takers, and in 1954 the post office closed. When James died in 1959, his son Thomas Rice Cleator became Cleator’s owner.

Today the population is around 11, and the town is owned by Cleator family members in Texas. The schoolhouse remains, several original buildings are occupied and the store and saloon remain open.

In 1994 Mona McCroskey interviewed Tom for the Sharlot Hall Museum.

According to Tom, in the 1930s there were six mines (DeSoto, French Lily, Swastika, Silver Corridor, Golden Turkey and Golden Belt) near town, 3-4 mills and 200-300 men living in Cleator, Mayer and at the mines. During the Depression, coal miners came from Kentucky, but scattered during the war when mines couldn’t get powder or tools.

As a kid, Tom chased and rode wild burros and had two pet badgers. The social scene included pie suppers, potlucks and dances with a Mexican band from Mayer. Election years were important because politicians came to talk, shake hands and distribute cigars. Most of the Cleator family’s food came by bartering and trading coffee, flour and sugar for milk, beef and barley.

During a harsh winter in 1937, Tom’s father bought old railroad ties at $10 per mile; a few miles’ worth cut up for firewood kept them alive.

The Cleator school generally had about ten students, plus Mexican children when mines were running. Tom boarded in Prescott to attend Prescott High School, graduating in 1943 and enlisting as an aircraft engineer and gunner from 1943-46.

Afterward, he returned to Cleator to tend bar, haul groceries and do other jobs for forty-some years, occasionally working in mines and drilling and blasting in Phoenix. In the 1950s he bought a sawmill and hauled logs from Crown King to sell to mines and deliver to Phoenix for cabinets. In the 60s he bought and hauled bailing wire from dairies to be leached for copper at the DeSoto mine.

In 1994 Tom described Cleator as having terrible traffic, as many as 6000 cars in summer. He said two people lived in Cleator, the bartender and a Navy retiree, but with about 500 summer homes in Crown King, one of which was Tom’s. Tom divided his time between Prescott, Cleator, Crown King and Phoenix until his death in 1996.

Editor's Note: Author Ricky Erway passed away suddenly and accidentally on January 25, 2020 while on vacation in New Orleans with her husband. She was a valuable volunteer for the Sharlot Hall Museum Library & Archives, and we want to recognize her work as a volunteer and Days Past author.

“Days Past” is a collaborative project of the Sharlot Hall Museum and the Prescott Corral of Westerners International (www.prescottcorral.org). This and other Days Past articles are also available at https://www.sharlot.org/articles/days-past-articles. The public is encouraged to submit proposed articles and inquiries to dayspast@sharlothallmuseum.org. Please contact SHM Library & Archives reference desk at 928-445-3122 Ext. 2, or via email at archivesrequest@sharlothallmuseum.org for information or assistance with photo requests.