After several train robberies in the Arizona Territory, the territorial legislature made train robbery a separate crime punishable by death. The law was passed on March 1, 1889. Less than three weeks after its passage, a sensational train robbery occurred that many believed would result in the death penalty for the train robbers under the new law. 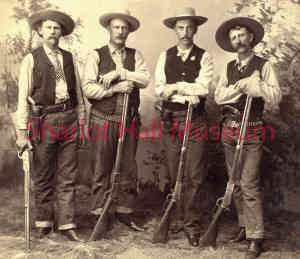 On March 27, 1889, Prescott’s newspaper, the Arizona Weekly Journal-Miner, gave this account of the train robbery that occurred on March 20th while the eastbound Atlantic and Pacific train was stopped at Canyon Diablo Station east of Flagstaff.

At about 10:30 P.M. four masked, heavily armed men entered the Express Car. They threatened “..Mr. Knickerbocker, the express agent, with their pistols and compelled him to ’shell out‘ all the money that he had in the safe, amounting to $600 to $800.”  None of the passengers or the conductor knew the robbery had occurred until Mr. Knickerbocker raised the alarm. He was unable to give a reliable description of the train robbers. “The railroad company quickly offered a $400 reward for the arrest and conviction of each robber.” “Posses have left from Flagstaff, Winslow and Holbrook and are confident that they will capture the train robbers in short order”.

On March 22 Yavapai County Sheriff “Bucky” O’Neill led the Flagstaff posse, comprised of Wells Fargo Special Agent Carl Holton, Deputy Sheriff James Block and Special Deputy Ed St. Clair. They doggedly pursued the train robbers for over 600 miles through the Navajo Reservation, over the Colorado River and into Utah Territory. Finally, on April 1, 1889, the posse surprised the train robbers in dense woods near Cannonville, Utah. When the outlaws refused a call to surrender, a fierce gun battle ensued, resulting in one of their horses being killed. Low on ammunition, they attempted to escape on foot. Within two days, all four train robbers were captured. They were identified as John Halford, William Stiren, Daniel Harvick and J.J. Smith. 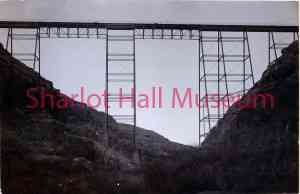 Sheriff O’Neill had the difficult job of getting the robbers from the remote Utah location back to Prescott for prosecution. During the long roundabout train trip, near Raton Mountain in New Mexico, J.J. Smith slipped his leg shackle and leaped out the window. After a short and unproductive search, O’Neill transported the three remaining prisoners to Prescott. On July 24th the Arizona Weekly Journal-Miner reported that John Halford, William Stiren and Daniel Harvick had pled guilty to highway robbery in order to escape the death penalty for train robbery. They were sentenced to 25 years imprisonment in the Arizona Territorial Prison at Yuma.

On July 24th the Arizona Weekly-Journal Miner reported that Sheriff O’Neill had returned with “A.J. Smith” (J.J. Smith) who had been captured in Texas. In the November 20th edition, the paper reported that Smith was also found guilty of highway robbery. Later he was sentenced to 30 years in the same Yuma prison.

None of the train robbers were charged under the new train robbery law and served only a fraction of their original sentences for highway robbery. On Aug 24, 1893, the Flagstaff newspaper, Coconino Sun, reported “J.J. Smith was pardoned from the territorial prison last week due to failing health.” The article went on to explain that the three men remaining in prison for the Canyon Diablo train robbery had all testified that Smith had not been involved in the robbery. The records of the Arizona Territorial Prison at Yuma show that Dan Harvick was paroled on Dec 25, 1896; John Halford on Nov 1, 1897 and William Stiren on Nov 1, 1897.