Herbert Bowers secured the appointment as post trader, or sutler, at the newly established military post of Camp Whipple before it was moved to the banks of Granite Creek in May 1864. By that time, he was headed to California, via La Paz, to bring back goods for his new store. By August, he was back with his brother Nathan to establish their business. 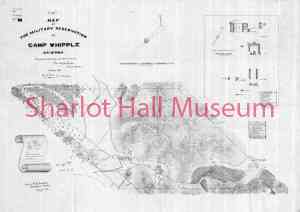 Post traders were appointed and regulated by the post Council of Administration, a board of officers convened to oversee post business of which the post trader was one. According to Article XXIII, section 196 of the Revised United States Army regulations of 1861, with an appendix containing the changes and laws affecting Army regulations and Articles of war to June 25, 1863, “The Post Council shall prescribe the quantity and kind of clothing, small equipments, and soldiers’ necessaries, groceries, and all articles which the sutlers may be required to keep on hand; examine the sutler’s books and papers, and fix the tariff of prices of the said goods or commodities; inspect the sutler’s weights and measures….”

The July 27, 1864 minutes of the Council of Administration for Camp Whipple listed what goods were to be sold and prices for the sutler’s store. Clothing items consisted of overshirts and undershirts as well as pants, dusters, drawers, hats, boots, shoes, socks, neckties, handkerchiefs, gloves, collars for shirts, and braces (suspenders).

To meet sewing needs, there were skeins and spools of thread, needles and scissors. There were razors, combs, soap and towels to take care of bodily needs. For boots and shoes, there was blacking with brushes to apply it. For the inner man, there was Wright’s pills and bottled Sarsaparilla for those needing a non-alcoholic drink. There was also a fair selection of tobacco, cigars and pipes as well as matches. If one needed a knife, there were six different models.

In the food consumption category, a person could buy knives and forks, tablespoons, plates, cups, butcher knives and fry pans. Two types of tea were available, but no coffee. Dried apples, grapes and peaches could be bought, as well as mackerel.  Canned goods such as oysters, turkey, sardines, peaches and tomatoes were available as well as saleratus (sodium bicarbonate), cream of tartar, Jamaica ginger, extract of lemon and other assorted extracts for cooking.

Correspondence needs were served with an assortment of paper, envelopes, pencils, pens and ink. There were also pass books and diaries for note taking.
Articles in October issues of the Arizona Miner stated that Bowers and Bro. constantly took greenbacks at 50 cents on the dollar. It also stated that they offered a large assortment of goods at fair prices. The discounting of paper money was a common practice at the time due to wartime inflation. If you paid in gold dust or coin, then the marked price is what you paid. Unfortunately,  military men were paid in greenbacks.

The brothers worked out of tents for the first few months, but were able to move into the commissary building in October 1864. The map of the fort drafted in 1869 showed that the sutler had, in addition to the store, a forage house, stable and mess room. Except for the store building, the others would have been built at the sutler’s expense.

In December 1869, Nathan sold out to his brother Herbert. This was stated to have been a mutual decision, as the firm of Bowers and Bro. continued to be active in other business in Yavapai County.