Barry Goldwater and the Palace 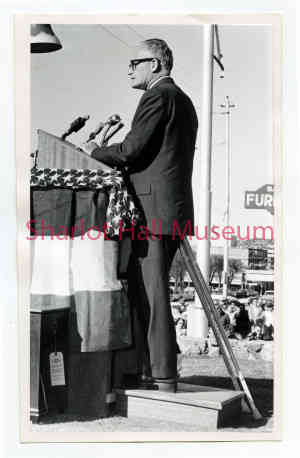 Whiskey Row of Prescott, Arizona is arguably the most fascinating, historical quarter-city block in the western United States. The centerpiece of this historic, jam-packed street has been the magnificent Palace Saloon, today the Palace Restaurant and Saloon. It is no wonder that one of Arizona’s favorite sons, Barry Goldwater—whose ties to Prescott are well documented—once lamented, “My only regret is that I didn’t buy The Palace when I had a chance.”

His friend, Tom Sullivan, who in 1977 believed he had purchased the Palace (it was still under contract at the time of the letter mentioned below but the deal fell through eventually), knew this. When writing Goldwater on July 26th of that year, his incentive was rather thinly veiled—his guilt quite transparent.

The bulk of his letter, however, disclosed his plans to restore the saloon to its early 1900s glory and to share its considerable history with patrons. “I know of your very deep and sentimental interest in Prescott and any help that you may be able to give will be greatly appreciated." Goldwater’s response was a truly honest, magnanimous and typically humorous letter, dated August 10, 1977. It began with a good-natured, “You rascal, you went and bought what had long been my desire to own. When I was in China during World War II, I received in a Christmas package a book, and I knew when I opened it there would be the deed to the Palace Bar which, at that time, was available.” According to Goldwater, the asking price then was a mere $20,000. He went on to share a story said to have occurred in 1889 regarding the transference of the territorial capital from Prescott to Phoenix. 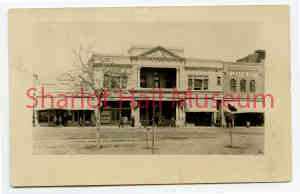 Goldwater wrote, “As you know, the second floor was a house of prostitution. I think the original brass beds are still up there as well as the bedpans, cuspidors, etc. There is a story that Bert Fireman can elaborate on for you involving the movement of the capital to Phoenix. The story is that the leader of the Senate, having one glass eye, had it stolen during the night. As a result, he couldn’t take his place in the Territorial Senate [the next day] and the lack of his vote sent the capital to Phoenix.”

According to the story, this vainglorious scoundrel, who represented Yavapai County and therefore Prescott, had a favorite “lady of the night”—“Kissin’ Jenny”—working at the Palace. She, so the legend goes, was thus hired by some Phoenician politicians to steal the fake eye. They predicted that this delegate’s vanity would prevent him from attending the voting session scheduled the next day, even with the issue of the territorial capital at stake. It is a great story and something like it might have happened in Prescott at another time, but Kissin’ Jenny is not to blame for the capital relocating to Phoenix. Legislative Act No. 1 was signed by Governor Conrad Zulick on January 26, 1889, moving the capital to Phoenix. The bill anti-climatically passed by seven votes and “was railroaded through both houses at the rate of sixty miles an hour.” 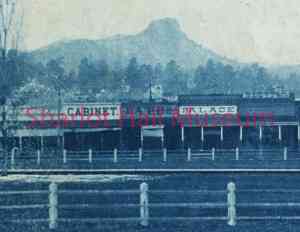 The other error in the story is that the Palace had no hotel upstairs until 1901. When it did, it was considered first-class. Prescott brothels were confined to Granite Street at the time.

Tom Sullivan never took ownership of the Palace. Nineteen years later, however, Sullivan’s idea of capitalizing on the Palace’s history came to fruition when Dave “Cowboy Dave” Michelson of California bought it. He went on to create a museum-like atmosphere therein that has attracted not only proud locals but people from all over the world. It still does.

“Days Past” is a collaborative project of the Sharlot Hall Museum and the Prescott Corral of Westerners International (www.prescottcorral.org). This and other Days Past articles are also available at www.archives.sharlothallmuseum.org/articles/days-past-articles/1 The public is encouraged to submit proposed articles and inquiries to dayspast@sharlothallmuseum.org Please contact SHM Research Center reference desk at 928-277-2003, or via email at archivesrequest@sharlothallmuseum.org for information or assistance with photo requests.