Once the Excelsior docked in San Francisco in July 1897 and a handful of newly rich miners disembarked with sacks of gold nuggets, the Canadian Klondike Gold Rush was underway. By spring of 1898, more than 30,000 would-be prospectors and entrepreneurs (most from the U.S.) were building boats at the Yukon River for the 600-mile voyage to the gold fields.

As early as January 1898, Arizona and Prescott were already gripped by gold fever. In a single month, the Prescott Weekly Courier reported multiple departures for the Yukon, along with other related news. For example, the January 7 edition states: “Peter Wenn, who has for a long time been in the employ of Goldwater Bros., has resigned his position with that firm and anticipates a starting for Dawson...next Wednesday. May he strike it rich.” 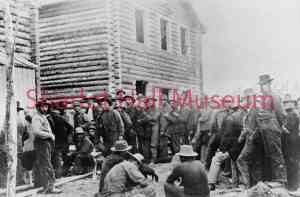 The January 14 edition reports that Frank Doggett has left for the Klondike, while the January 28 edition mentions multiple departures, including Charles Bags and John Speck, noting: “They will get there as quickly as they can. Both leave many friends in this section who wish them all success imaginable.” Likewise, S.M. Waterman “leaves Prescott for the Klondike country today. His friends wish him a safe journey and a fortune in the Klondike.” In addition, “Parley Smith is expected to arrive in Prescott in a few days on a short visit to his family, after which he will return to Dawson City….”

The January 21 edition includes this notice: “A very rich specimen of gold rock which goes $90 per ton can be seen at the Windsor. It comes from the Klondike claims Copper Basin district.”

Already, entrepreneurs were cashing in on the excitement. The January 21 edition carries an ad for an illustrated book (with maps) that promises to tell aspiring prospectors all about the Klondike, including how to be properly outfitted for the adventure. “Subscriptions taken at Corner newsstand or by Rosa Miller.”

Not all reports were positive. The January 14 edition reprints excerpts from a letter by Prescott residents Parley Smith and Ben McCraig. “There are a few good claims; much money taken out; country overrated. Hardships something terrible to reach Dawson. 42 to 50 degrees below zero. Meet men every step of the trail with faces frozen. Only 4 hours of sunlight to the 24.” In addition, “If a man has lots of money to speculate with, he can make money. Everything $1.50 per pound – rice, bacon, beans, etc. Flour $75 a sack cannot be had at that price now. Drinks 50 cents each; whiskey $16 a bottle.” Also, “There will be a great deal of suffering before steamers arrive in the spring. Great many leaving, but it is death to do so.” Finally, “Plenty of gold; hardest place on earth to mine in.” 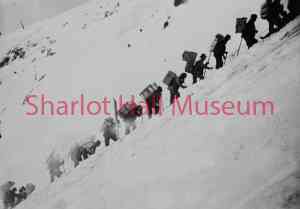 A later letter notes: “Any one [sic] coming in should bring one year’s supplies.” Also, “Joaquin Miller lost an ear and two toes during a trip from Circle City to Dawson.” Despite this discouraging news, they added: “It is stated that five millions of dollars in gold dust is now stored in Dawson City.”

Not every Arizonan was a potential prospector. Notorious gunfighter Buckskin Frank Leslie arrived in the Yukon and promptly disappeared from history. Nellie Cashman, known in Tombstone as “the miners’ angel,” opened a Klondike boarding house. One man gathered 200 burros along the Gila River to sell in the gold fields.

But the most successful (and colorful) Arizona entrepreneur was Arizona Charlie Meadows. In Part II, we’ll see how he acquired (and mostly lost) a fortune in the Klondike without finding a single gold nugget.