Are You a Downwinder?

Downwinder: this term has become well known in Yavapai County. Downwind radiation exposure has been cited in many cancer diagnoses and blamed for the deaths of many long-term residents of the county. 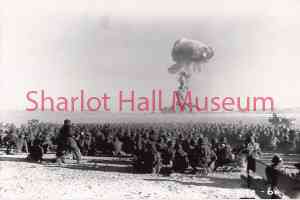 How did this happen? During the Cold War, the U.S. government built a huge nuclear arsenal. Above-ground testing began in 1951 at the Nevada Test Site, where over 100 nuclear bombs were detonated through 1958. All nuclear testing stopped in 1958 by agreement among the United States, the United Kingdom and the USSR. In 1962, the government detonated several above-ground devices in July of 1962. This was the last time nuclear weapons were tested above ground. Nuclear testing continued below ground at the Nevada Test Site. January 21, 1951 to October 31, 1958 and June 30, 1962 to July 31, 1962, when above-ground testing was conducted, were later designated as Downwind time periods.

After the 1962 testing period, many of the workers at the test sites and local residents filed class action lawsuits alleging exposure to known radiation hazards. All of the suits were dismissed by the courts. Congress responded by creating the Radiation Exposure Compensation Act (RECA) on October 5, 1990. The Act was then expanded in 2000, when the Radiation Exposure Screening and Education Program (RESEP) was created. RECA provides monetary compensation as an apology to individuals who developed certain cancers following their exposure to radiation. RECA authorized the payment of $50,000 to individuals who lived downwind from the Nevada Test Site and developed one of the specified diseases.

Congress designated several counties in Nevada, Utah and Arizona as areas impacted by the radiation exposure. In Arizona, the Downwind-eligible counties are Apache, Coconino, Gila, Mohave (above the Grand Canyon), Navajo and Yavapai. 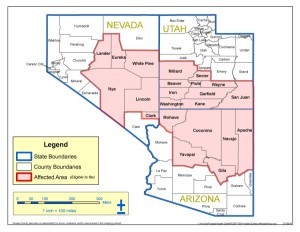 Tom Brodersen, a local resident who was a student and the 2001 and 2002 summer intern at the Sharlot Hall Museum Archives, conducted research and wrote a Days Past article on Downwinders that was published November 28, 2014. In it, he noted that “People in Prescott probably thought they had little reason to fear fallout from the Nevada Test Site - approximately 250 miles northwest, as the dust flies. However winds often carried the radioactive dust into Yavapai County. Even if people knew that fallout was coming to town they might not have been concerned because throughout 1950s the federal government issued continual assurances that there was no danger to the public.” Assurances were published in booklets and brochures.

However, this did not quiet all concerns about the consequences of nuclear testing. Within a decade of the first tests, leading scientists such as Nobel-winning chemist Linus Pauling spoke publicly about atomic dangers and circulated petitions to stop nuclear testing. Organizations were also created to make the public aware of the health effects of nuclear testing and radiation. One such organization was the Committee for Nuclear Information, based in St. Louis. The CNI was organized by Doctors Eric and Louise Reiss, as well as scientists and civic leaders.

Many local residents have been affected by these nuclear tests, as we now know. Perhaps the most well-known was longtime Prescott resident and former City Council member John Hanna, who died of non-Hodgkin's lymphoma in October 2013 - which the government has acknowledged was likely caused by radiation from nuclear testing. Quoting from the book "Downwind: A People's History of the Nuclear West," by Sarah Alisabeth Fox: "Many families" in the areas affected by fallout "kept livestock and gardens or bought meat, milk, and produce from their neighbors, unwittingly gathering radiological contamination... and placing it on their dinner tables."

To file a RECA claim, individuals need to provide documentation to show physical presence in the Downwind counties for two years during the Downwind time periods.

In addition, individuals need to establish their diagnosis of a compensable cancer. Compensable diagnoses include leukemia, multiple myeloma, lymphoma, and cancers of the thyroid, lungs, esophagus, and breast, among others. Applicants do not need to provide causation on their cancer diagnosis. They only need to gather medical records that show proof of the eligible cancer.

RECA expires on July 9, 2022. All Downwinder RECA claim must be submitted before this date.

Join Shannon Williams, health promotions manager with RESEP, when she presents “Downwinders Program: Are You Eligible?” on February 10 at 2 PM at Sharlot Hall Museum. Come early, as seating is limited.

“Days Past” is a collaborative project of the Sharlot Hall Museum and the Prescott Corral of Westerners International (www.prescottcorral.org). This and other Days Past articles are also available at www.sharlothallmuseum.org/library-archives/days-past. The public is encouraged to submit proposed articles to dayspastshmcourier@gmail.com. Please contact SHM Library & Archives reference desk at 928-277-2003, or via email at dayspastshmcourier@gmail.com for information.