The Aerial Trams of Yesteryear

Today aerial tramways make it possible to soar above the terrain in a tram/cable car or chairlift. Before tramways carried people, they were used in the mining industry to transport ore quickly and economically over rugged, inaccessible terrain. 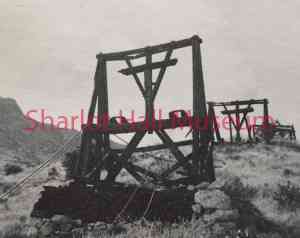 The concept of aerial tramways began in the early 1700s, but the European introduction of wire rope in the 1830s led to increased development and use. Wire rope is several strands of steel wire twisted to form a cable. Due to lighter weight and strength, it soon replaced hemp rope in many applications, including mining. Although numerous aerial tramways for mining were built worldwide, it wasn’t until after the Civil War that their U.S. construction expanded.

The first aerial tramway in the western U.S. was built in 1870 at Treasure Hill, Nevada. It used a single-rope design of grooved pulleys, buckets, towers and a continuous loop of wire rope cable. Each bucket was attached to the cable with clips. Andrew Smith Hallidie and Charles Hodgson are credited with designing the single-rope system. However, it had design limitations. It only covered 4 miles, had a capacity of less than 200 pounds per bucket and operated relatively slowly.

In 1874 a double-rope (or bi-cable) system was designed by German engineers, Theodore Otto and Adolph Bleichert. This design, known as the Bleichert system, became preferred over the single-rope design. The double-rope design had buckets hung from one cable with a separate smaller cable pulling the buckets. This new design was more durable, allowed up to 2,000 pounds per bucket and enabled the tramway to operate over longer distances. 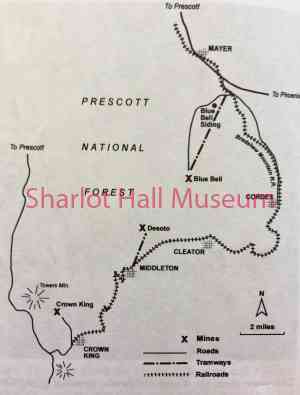 In 1888, after the Bleichert system was patented in the U.S., the Trenton Iron Company of Trenton, New Jersey became the North American licensed agent and manufacturer. One of the early aerial tramways built by the Trenton Company was at the Old Dominion Copper Mine in Globe in 1891. Spanning 1,250 feet, its capacity was 175 tons per day.

In Yavapai County, two Bleichert system aerial tramways were built in the Bradshaw Mountains, one at the De Soto Mine, the other at the Blue Bell Mine. By 1904, when the Bradshaw Mountain Railroad connected Mayer and Crown King to the Prescott & Eastern Railroad, aerial tramways to transport ore from these two mines to railroad connections were feasible. Tramways also transported supplies and miners to and from the mine.

At the De Soto Mine, the Middelton railroad station was within a mile, although there was a 7.5 mile road between Middelton station and the mine. The need to transport ore quickly made the construction of a direct 4,000 foot aerial tramway more economical. Completed in April 1904, it could deliver 300 tons of ore per day. It operated by gravity since the railroad station was at a lower elevation than the mine.

The following year, an aerial tramway was built between the Blue Bell Mine and Bradshaw Mountain Railroad’s Blue Bell Siding, located two miles south of Mayer. It was 3.3 miles long and could deliver 500 tons of ore per day. 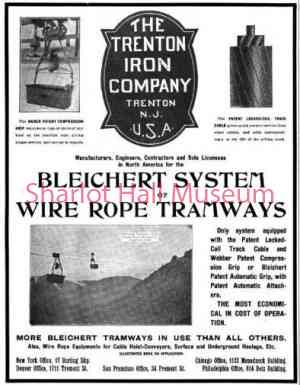 Tramway operations were not without incident. Buckets would occasionally break loose. At the Blue Bell Mine, a bucket loaded with dynamite hit another bucket. Luckily, no explosion occurred when both buckets fell to the ground.

Both tramways operated on and off for several years. The De Soto stopped operating in 1931 after fire destroyed several towers and the terminal at Middelton. The Blue Bell deteriorated and was disassembled in 1932. Today little evidence of these tramways exists.

During the heyday of mining from 1890 to 1920, over two dozen aerial tramways operated throughout Arizona. The end of their use for mining in Arizona occurred in 1997, when a four-mile system at Morenci was dismantled.