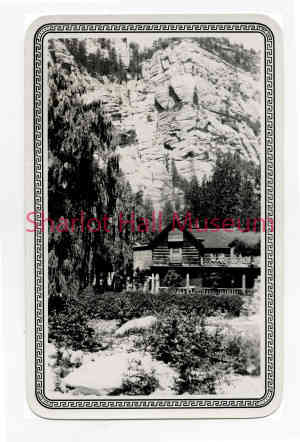 The first cabin at the site was built by Charles “Bear” Howard in 1870. His nickname “Bear” came from having allegedly killed five bears with his own knife. By 1881, Howard sold the cabin to the Thomas Family. This family planted, sold and traded apples and tobacco in Sedona. A second cabin was added in 1902 by Phoenix Superior Court Judge Bennett.  Judge Bennett later assisted the Thomas’ in building the first road through Oak Creek Canyon in 1912.

The movie of Zane Grey’s story called The Call of the Canyon, starring Richard Dix and directed by Victor Fleming (The Wizard of Oz), was filmed here in 1922. Carl Mayhew, a still  photographer from Flagstaff, was reportedly working on the production crew. He fell in love with the lodge and area so much that in 1925 he purchased the site with a partner, whom he later bought out. The Mayhews opened the cabins up as a lodge that same year and later connected the other two cabins. Over the years, he continued to add more rooms until his death in 1943. His family carried on with the business for many years following his death.

In all, the lodge was operational in Oak Creek Canyon from 1925 to 1968. Rates were $15 per day, single; $20 to $24 per day for a double. Guests could travel to Flagstaff either by the Santa Fe Railroad or Frontier Airlines, then board the Santa Fe bus which took them directly to the lodge. During its heyday, many famous guests such as President Herbert Hoover, Clark Gable, Jimmy Stewart, Walt Disney, Maureen O’Hara and Susan Hayward all stayed at the lodge.  In 1968, the Mayhew family was no longer able to continue operating the lodge and eventually sold it to the U. S. Forest Service.

Today, the ruins of the lodge are all that remains - a stone fireplace, rock pillars and a cave, which was utilized as a root cellar. The lodge swimming pool was located at the trailhead parking lot, which was paved over in the 1960s.