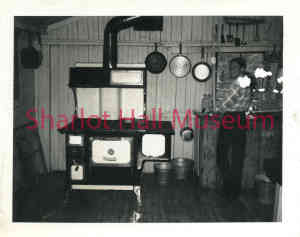 This photo show an interior view of Palace Station in the 1980s. Sue Vandergon is pictured next to stove. The Vandergon Family assumed upkeep of the Station in the early 1980s. Doug Vandergon was an employee of the National Forest Service during this time.

In 1900, a new and improved road was opened.  Unlike the original trail, which followed the creek bed, the new road was suitable for buckboards and enabled travelers to journey into the Bradshaw Mountains without need for a stage station. During this same time, telephone service was introduced into the area and the improved communications further reduced the role of Palace Station. In 1910, early-day automobiles began traveling Senator Highway making the Station obsolete and on October 31, 1913 Matilda sold Palace Station for a meager $10.00 and moved to Prescott. Matilda died on April 14, 1929, and was buried in Mountain View Cemetery in Prescott. Subsequently, in 1963 Palace Station came into the public domain of the Prescott National Forest and on April 30, 1976, it was listed on the National Register of History Places in Yavapai County, Arizona under the title, “Palace Station District."