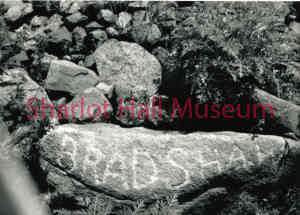 Close view of grave. Isaac "Uncle Ike" Bradshaw (b. 1819 - d. 1885) was born in Tennessee and a house carpenter by trade. He traveled from California to the Arizona Territory in 1863 to assist his younger brother, William D., in operating a Colorado River Ferry at Olive City, La Paz. Isaac left his wife behind in California. The brothers reportedly mined claims near Prescott briefly and abandoned those claims, due to the danger of Indians and the difficulty of transportation. William committed suicide in December 1864.