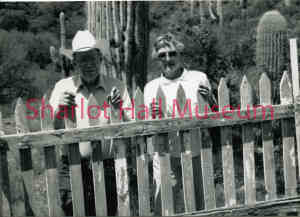 The Bradshaw Mountains were named either for William or for both William and Ike.