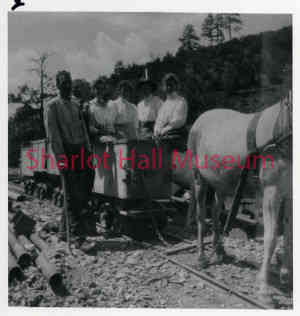 The Stephen Weaver (S.W.) Higley family is shown on a picnic at Senator Mine. None of the people shown are identified.

Stephen Weaver Higley (b. 1857 – d. 1935) was born May 3, 1857 in Rutland, Ohio. He ran away from his father’s ranch while living in Missouri and was hired by a stagecoach company as a shotgun guard on stages that ran out west. When he was around 15 or 16, the Santa Fe Rail hired him to work in Kansas City as a laborer. Eventually, as a Santa Fe Rail superintendent, his work took him to Prescott, Arizona where the rail company was headquartered. While there, he is credited with building the short line between Arizona and California which ran through Parker, the Phoenix/Hayden, Arizona line and the Crown King Road.

After working on the line for 35 years, he resigned in 1909 and turned his endeavors to procuring land in the Salt River Valley for ranching, mainly sheep. He had extensive land holdings in Arizona near or in Higley, Avondale, and Tempe. His personal residences were listed in downtown Phoenix and Paradise Valley where he had a 160+ acre ranch. He and his family purchased and lived in the Rosson house at Sixth and Monroe Streets in Phoenix.

In 1909, he and friend Sims Ely (b. 1862 - d. 1954) purchased the Arizona Republican newspaper (the Arizona Republic’s predecessor). He served as president while Ely was the general manager. In 1911, S.W. purchased Ely’s interest in the paper and then sold the publication to Dwight B. Heard (b. 1869 - d. 1929) in 1912. After the sale of the newspaper, he continued to pursue his ranching interests and then moved to Oklahoma in 1925. He continued to ranch sheep until he died on July 26, 1935 in Woodward, Oklahoma.