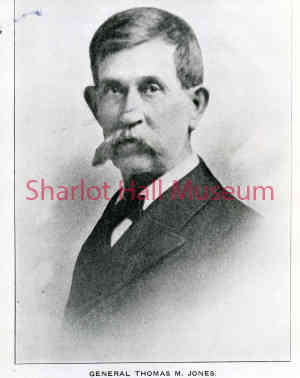 Thomas M. Jones (b. 1832 - d. 1913) was born March 11, 1832 in Virginia. His father was John Jones of Pembroke, a country place near Hampton, Virginia; his mother was Mary Booker of Sherwood, Virginia. Both of their parents’ families had settled in Tidewater, Virginia, in the earliest days of the Colonies. He entered the United States Military Academy, West Point in June 1849 and graduated in 1853. Following graduation, he served at Governor’s Island in New York Harbor, then in Texas at Ringgold Barracks in Rio Grande City, Texas and then at Fort Davis in Jeff Davis County, Texas. His last service to the United States was a perilous mission to carry $30,000 from the Government mint in New Orleans, Louisiana to pay off the United States troops at San Antonio, Texas. While in New Orleans, he sent in his resignation to President James Buchanan and offered his services to the State of Louisiana. His responsibilities for the Confederacy included: Adjutant General of the State of Louisiana, Commissary General of the Department of the Gulf, Brigadier in the Kentucky and Tennessee campaigns, and Major General in command at Mobile and in command at Pensacola. He married Mary Cowan London of Wilmington, North Carolina on June 29, 1864.

Following the Civil War, he turned to farming and settled in Fauquier County, Virginia, where he farmed overworked land from 1866-74 and 1877-81. He served as Professor of Agriculture, Maryland Agricultural College, near Washington, D. C., 1874-77 and as Superintendent of Public Schools, Warrenton, Virginia, 1881- 85. During President Grover Cleveland’s first administration, he accepted the position of Indian Agent for the Shoshones and Northern Arapahos, near Fort Washakie, Wyoming, 1885-89. He served as Superintendent of the Indian Training School, Santa Fe, New Mexico, 1893-97, and then served in Oklahoma at the Cheyenne and Arapaho Agency near Fort Reno, 1898-1908.

In the summer of 1908 he moved to Prescott, Arizona. He died March 7, 1913 in Prescott at age 81. He was a devoted Mason and a member of the Episcopal Church. At his death, his wife and four of his children, Albert Marshall Jones, Alex London Jones, Annie Campbell Jones and Florence Troy Jones were with him. Another son, Robert London Jones, who resided in Monroe, Louisiana, also survived him. He is buried in the Masonic Cemetery in Prescott, Arizona. Handwritten on the back of this photograph is: “Photo from Annual Report Association of Graduates, U. S. Military Academy, 1913, which contained his obituary.”