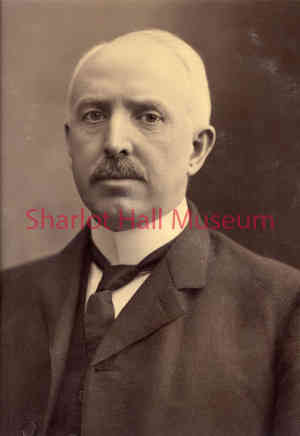 Mr. Murphy arrived in Arizona in March 1878 and always resided in Prescott, Arizona. He came from Santa Rosa, California, where he had been a stage driver. In Prescott, he took an entirely new course and entered the business field. His first venture in Prescott was in the clothing and haberdashery business. He developed an interest in mining and was associated with Senator William Andrews Clark with the purchase of the United Verde Mine. Later, he induced "Diamond" Joe Reynolds to purchase the Congress Mine; the sale was the underlying cause of the construction of a north and south railway running through Arizona. Murphy, along with other financiers, built the railroad from Ashfork to Prescott in 1883 and within two years completed it to Phoenix. This road was later sold to the Santa Fe, Prescott and Phoenix Railway Company. Murphy was named President of the company and remained so until his death. The Phoenix and Eastern, designed to become part of a transcontinental system, was built east from Phoenix but stopped by a combination of topography and an injunction suit, terminated at Box Canyon in the Gila Valley. It then became a Southern Pacific subsidiary and was known as the Arizona Eastern. The Bradshaw Mountain Railroad, from Prescott to Crown King, Arizona and the branch to Poland, Arizona were built by Murphy and sold to the Santa Fe. Some of the mining and other companies which Frank M. Murphy formed included the Poland, Lookout Copper, Yavapai Consolidated Gold, Silver and Copper Company, Tombstone Consolidated, Gila Copper Sulphide Company, the Prescott National Bank which then became the Prescott State Bank, and the Bashford-Burmister Company.