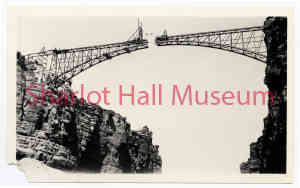 This photo shows the construction of the Grand Canyon Bridge, later named the Navajo Bridge, across Mable Canyon and above the Colorado River.

Construction of the original Navajo Bridge began in 1927, and opened to traffic in 1929. The Kansas City Structural Steel Company built the steel spandrel bridge design, which spans Marble Canyon, 470 feet above the Colorado River, in Grand Canyon National Park.  The original bridge was 834 feet in length and offered an eighteen-foot surface width with a load capacity of twenty-three tons.  At the time of its opening, it was considered the highest steel arch bridge in America. It provided a vital transportation link over the Grand Canyon between northern Arizona and southern Utah. The bridge replaced Lee’s Ferry as the sole crossing of the Colorado River within a distance of 600 miles. The project was paid for by the newly formed Arizona State Highway Commission, later named Arizona Department of Transportation, and in cooperation with the United States Department of the Interior's Bureau of Indian Affairs, as the eastern landing of the bridge is on the Navajo Nation.

By 1990, officials decided that the traffic flow was too great for the original bridge and that a new solution was needed. The sharp corners in the roadway on each side of the approach had become a safety hazard due to low visibility, and deficiencies resulting from the original design's width and load capacity specifications were becoming problematic. The bridge had also become part of U.S. Route 89A.  The final decision was to build a stronger and wider parallel bridge beside the existing structure.  The new bridge was completed in 1995 and was constructed of high strength steel in order to be visually compatible with the historic bridge and the setting.  The original structure remains in service as a pedestrian and equestrian crossing and was listed on the National Register of Historic Places on August 13, 1981. It has also been designated as a Historic Civil Engineering Landmark.