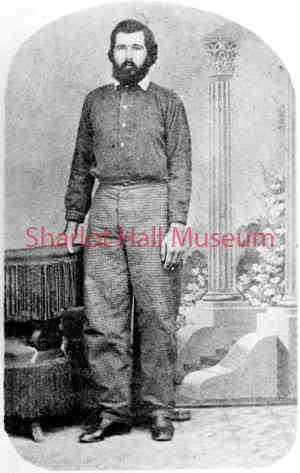 John Bennett Townsend (b. 1835 – d. 1873) was born July 28, 1835 in Kentucky. He and his family grew up in Texas. He met and married Elizabeth "Lizzie" (Vickers) Townsend, later Aldridge, and they had six children – Clara Becker Vroom, Dee Townsend, Lula Townsend (died when she was sixteen), Ora Coleman French, Chancy Townsend and John “Ben” Townsend, Jr. He migrated to Arizona in 1865, along with his father-in-law, John Vickers and they settled in the lower Aqua Fria region southeast of the present town of Mayer and began farming the land. He was a Confederate soldier during the Civil War, an Army scout and Indian fighter excellent rifleman. In June, 1871, he led a successful raid against Apaches and recovered most of the cattle stolen. He was presented with an engraved Henry rifle, which was placed in the Masonic Temple. He was killed September 16, 1873 near Prescott, Yavapai, Arizona Territory, at Dripping Springs after tracking single-handed, eight Apaches who had raided his home garden. When his body was found, it was not mutilated by the Apaches, which was unusual at this time. John's body was disinterred and finally laid to rest in the Prescott Masonic Cemetery.