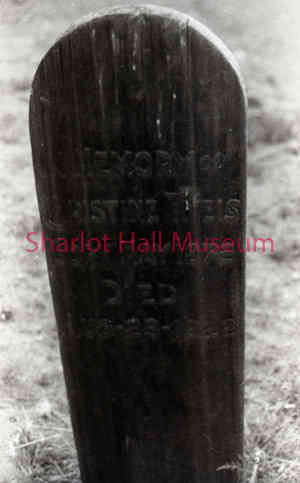 Sarah Theis was born in Sweden in May 1872 and immigrated to the United States as a young woman.  She and her husband, Carl Raymond Theis (b. 1872 - d. 1950), eventually made there way West and settled in Prescott, Arizona Territory.

Sarah was a laundry worker and spent many hours washing and carrying loads of clothes to different places in town.  On Wednesday, August 23, 1922 while she was crossing the street in Prescott she was hit by an auto-truck.  She was taken to Mercy Hospital, but soon died.  She was buried in Citizens Cemetery.

Citizens Cemetery was established on 6.5 acres of land in 1864, the same year Prescott became the Territorial Capitol of Arizona.  At that time, the cemetery was considered to be far from downtown Prescott.  The first recorded burial here was that of Joel Woods, a state legislator from Colorado who probably visiting the new Territory.  In those days, people were often buried in the area where they passed away.  His grave is unmarked and the location no longer known.

This is the oldest official cemetery in all of Arizona.  While over 3000 graves are believed to be within its walls, there are reliable records or tombstones for only about 1000 of them.  Its residents include the rich and the poor, the famous and the infamous, and the forgotten.  Large areas of vacant land hide many unmarked graves.  Citizens Cemetery was purchased from private owners by Yavapai County in 1884.  Burials ceased in 1933 when it was determined the cemetery was full.

After that, Citizens Cemetery fell into many years of neglect, overgrown with weeds and damaged by vandals.  In March 1996, the Yavapai Cemetery Association was formed by Pat Atchison, and she and a group of dedicated volunteers worked tirelessly to restore and upkeep the cemetery, and to research the lives of those interred there.  The association finally disbanded in 2018, and control reverted back to Yavapai County.